Kidney Failure On the Rise Among Australians With Type 2 Diabetes

Written by Ishwarya Thyagarajan
Article Reviewed by The Medindia Medical Review Team on December 20, 2018 at 12:48 PM
Health In Focus

Diabetes mellitus or diabetes, as it is commonly known has been considered one of the most important triggers for kidney failure. About 10-40 percent of those with Type 2 diabetes are known to suffer from kidney failure and are recommended for dialysis or kidney transplantation.

A research team from the Baker Heart and Diabetes Institute has extensively studied the Australian population from 2002 to 2013 to examine the trends in end-stage kidney disease. While studying around 1.3 million Australians with diabetes, it has been recorded that kidney failure has increased in those with Type 2 diabetes, aged less than 50 years. This has led to a decrease in quality of life, also forcing the nation's already expanding dialysis and transplantation services to cater to more of its population.
Kidney Failure On the Rise Among Australians With Type 2 Diabetes

The research team has highlighted the need for an aggressive course of treatment for people found to have early-onset Type 2 diabetes. This would significantly reduce the progression of kidney disease among the population.


Highlights from the Study

The research team is most concerned with one crucial finding - the rise in end-stage kidney disease (ESKD) is highly progressive in only those aged under 50 with Type 2 diabetes. It has been stable in those with Type 1 diabetes and Type 2 diabetes in residents aged 50-80.


‘Australians under 50 years, with type 2 diabetes are more prone to kidney failure. An aggressive treatment is needed to prevent the progression to end-stage kidney disease.’
Read More..


Several other studies from around the globe support this finding which was published in the American Journal of Kidney Diseases. In addition to this, the team also arrived at the following conclusions:

End-stage kidney disease or ESKD occurs when the kidneys are unable to function normally leading to the buildup of waste and excess fluids which otherwise would be excreted. When the kidneys fail to do so, dialysis and transplantation would be required to sustain the patients.

Diabetes has been identified as the primary cause for ESKD and is accountable for over 40 percent of newly reported cases of kidney failure in most developed countries. The patients could experience a wide range of symptoms including nausea, loss of appetite, fatigue, sleep problems, and muscle cramps.

Professor Jonathan Shaw, a senior author, diabetes researcher and endocrinologist from the Baker Institute has made a critical observation in this context. Owing to the increased prevalence of diabetes, in addition, to the rise in incidence of EKSD in Type 2 diabetes patients, the Australian healthcare system is bound to find itself burdened with increased demand for dialysis and transplantation services.

Prof Shaw was quoted saying, "We've known for a long time that the total number of people requiring kidney dialysis or transplantation in Australia was going up but we thought that was mainly due to increasing numbers of people with diabetes."

He also added that "The main concern is the increasing rate in the under the 50s. This is a really troubling finding but hopefully, by improving medical care, by aggressively managing blood pressure and other cardiovascular risk factors in addition to blood sugar control, we can start to turn this around."

In conclusion, Prof Shaw mentioned that it remained uncertain if the present scenario in Australia is an indication of the less aggressive medical therapy that has been used to treat Type 2 diabetes patients over the past 12 years or the way kidney diseases have been managed so far. There is also the possibility of the emergence of a new aggressive form of the disease which calls for further research in this area to understand the implications clearly. 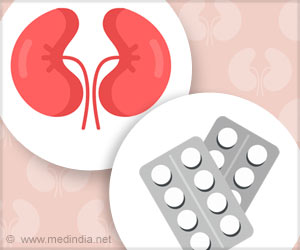 Heres How You can Prevent Diabetic Kidney Disease
Diabetic nephropathy can be prevented by blocking the activation of the epidermal growth factor receptor (EGFR) with drug Erlotinib.
READ MORE