Written by Ishwarya Thyagarajan, Masters in Development
Article Reviewed by The Medindia Medical Review Team on December 29, 2018 at 5:36 PM
Health In Focus

Africans and African Americans are at a higher risk of developing chronic kidney disease and kidney failure compared with European Americans. They are also known to have an increased risk for cardiovascular disease, hypertension and diabetes when compared to Americans.

Earlier studies have shown that this risk is considerably due to genetic variations in a gene called apolipoprotein L1 (APOL1), which creates a protein that is a component of HDL also known as the good cholesterol. These variants are believed to have originated in the sub-Saharan Africa years ago, and hence present in individuals of sub-Saharan African ancestry.
Kidney Disease Gene Variant Affects More Populations Than Believed Earlier

Among the African American population, the APOL1 high-risk variants have been linked with a higher risk of kidney failure, but there has been high variability in kidney function decline among those with and without the variants.

A research team comprising of scientists from the Icahn School of Medicine at Mount Sinai, Stanford University, and the University of Colorado have made a significant discovery following a study that could be termed as the largest population genomics investigation so far. The kidney disease risk variants of the APOL1 gene have found to be present in considerable frequencies in the Caribbean and Latin American populations as well. As these populations have always been under-studied in the APOL1 context, the gene's impact on this ethnic group has remained widely unknown.


Population genomics or population genetics as it was earlier known, involves large-scale comparison of DNA sequences of populations. It is used to understand genetic change among humans, particularly in migratory population.

The study had linked genetic and demographic data covering more than 110 populations.

Girish Nadkarni, MD, Assistant Professor of Medicine (Nephrology) at the Icahn School of Medicine and leading author of the study mentioned that "This finding is crucial in early detection of at-risk individuals who may not be indicated for genetic screening due to self-reporting of ethnic origins, but may still be at high risk due to the presence of APOL1 risk variants."

He went on to add that "It is important to fully understand the global distribution of these variants based on country of origin and genetic ancestry rather than self-reported race/ethnic group."

Subsequent to the discovery, the research team recommends that the physicians treating this population could customize treatment methods being aware of the presence of APOL1 risk. This would be an apt example of what is known as precision medicine.

The data collected by the team would also help the medical community to understand better the at-risk kidney disease populations worldwide.

Eimear Kenny, Associate Professor of Genetics and Genomic Sciences at the Icahn School of Medicine at Mount Sinai and Director of the Center for Genomic Health was quoted saying "APOL1 is the poster child for precision medicine, as the risk variants have a large impact on lifetime risk for not only kidney disease but also early onset hypertension and cardiovascular disease."

On the topic of what is way forward for the research team at Mount Sinai, she added that "Here at Mount Sinai, we are leading national efforts to learn about the impact of APOL1 risk variants in routine clinical settings, and the gene is currently under intense scrutiny as a therapeutic target and across diverse populations."

The research team calls for deeper understanding of distribution patterns of the risk variants of the gene and not rely heavily on self-reported race/ethnic group data.

African Americans at Higher Risk of Kidney Failure
The increased risk of kidney disease in African Americans is due to genetic variations in a gene called apolipoprotein L1 (APOL1), which creates HDL cholesterol.
READ MORE 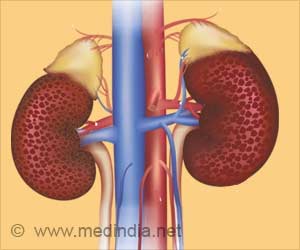 Gene That Causes Chronic Kidney Disease Identified
Scientists have discovered a single genetic mutation in the CUBN gene that is associated with albuminuria both with and without diabetes.
READ MORE