A research team from the Johns Hopkins University School of Medicine have discovered that two problem proteins that were associated with Parkinson's disease are linked chemically, which could imply that both these proteins could be treated using the same drug. This study was published in the journal Cell Reports, providing insights into possible drug therapy for Parkinson's disease.

Previous studies have shown that the reduction of the protein called PARIS in mice, with a condition similar to Parkinson's, protected against reduction in neurons that make dopamine. Dr. Ted Dawson, a Neurology professor and the director at Johns Hopkins University School of Medicine's Institute for Cell Engineering said that it was believed that PARIS could be chemically associated with other proteins that played an important role in Parkinson's. According to the professor, this suspicion was confirmed in the current study.

Earlier studies have found that mutations in the genes that code for protein Parkin as well as defects in the protein PINK1 has been found to result in the death of neurons that produce dopamine.


‘The proteins PINK1 and Parkin are chemically related, raising the prospect of single drug treatment for Parkinsons disease.’


The research team carried out experiments on mice to identify if the two proteins implicated in Parkinson's were acting through PARIS, as a single intermediary. In an earlier study conducted by the scientists in the year 2011, it was found that the protein Parkin, present in the human and mice brain tissue, added ubiquitin as a chemical tag to PARIS, which leads to the breakdown of other proteins.

The research team conducted biochemical tests to determine if there was a relationship between PINK1 and PARIS. The findings of the study were
The research team then studied a cause-effect relationship by lowering the levels of PINK 1 protein in the lab-grown human cells and found
When the amount of PINK1 protein was reduced by 80% in living mice, it was found that there was
When the concentration of PINK1 was increased in human lab-grown cells, it was found that
The roles played by Parkin and PINK1 aided in safeguarding the brain cells by resulting in the breakdown of PARIS. The defects associated with any one of the proteins can be set right by treating for the levels of PARIS.

Parkinson's disease is a chronic disorder that affects movement and can worsen over a period of time. Around 1 million people suffer from this condition in the US and the disease is characterized by lowering motor abilities like gait, rigidity of limbs, tremors of the limbs with a lack of balance and co-ordination.

The symptoms associated with Parkinson's are due to the destruction of vital neurons in the brain. The major area of the brain that is affected is the substantia nigra. Dopamine-producing neurons are reduced significantly, affecting movement.

The exact causes of the disease are not known, but studies such as this aids in understanding the effects of various proteins levels in the progression of the disease. The therapy afforded to patients with Parkinson's involves deep brain stimulation and medication which neither delay the disease progression nor treat the condition. This makes it necessary to find effective treatment strategies which will aid in reducing symptoms.

Though there are further studies that are required to validate the current discovery of the role of the proteins PINK1 and Parkin in Parkinson's disease, the development of a drug that targets these proteins could mean a more effective treatment strategy for the disease. 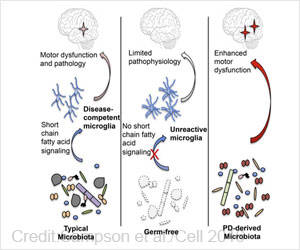 Parkinsons Could Begin in the Gut and Then Move to The Brain
Gut microbes could play a key role, along with genetics, to trigger symptoms of Parkinson's, highlighting the importance of probiotic therapy.
READ MORE