Written by Anil Golani
Medically Reviewed by The Medindia Medical Review Team on June 13, 2015 at 5:45 PM 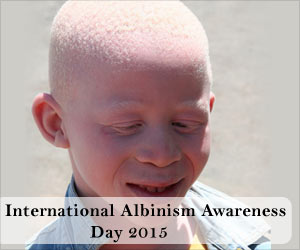 Albinism is an inherited disorder that is characterised by little or no production of melanin pigment. Type and amount of melanin produced determines colour of skin, hair and eyes. There is no cure for albinism, however people suffering from this disorder can take measures for protecting their skin and increase their vision. Albinism also leads to social isolation and discrimination.

Safer, Natural Skin Whitening Cream, Sans Side Effects, In the Offing
Active ingredients found in a herb used in traditional Chinese medicine can be used as a safer, more effective alternative to skin whitening creams and lotions.
Advertisement

What is World Albinism Day?

To mark the occasion of Albinism, United Nations has declared June 13 of every year as, "International Albinism Awareness Day". This will be in effect from 2015 and would be observed on this day hereafter every year. The United Nations aims to increase awareness and initiatives that can be taken to promote and protect the human rights of persons with albinism. In addition, understanding of albinism would help to close the gap between those untreated and treated.

As per estimates, about one in every 17,000 people has some kind of albinism. In India alone there are 70,000 people suffering from albinism. The condition can affect both sexes equally, however one type known as ocular albinism (affecting eyes) is more pronounced in males than females. Albinism can affect people from all races.

Albinism is an inherited genetic condition. Many forms of albinism are recessive, which means that child inherits one abnormal gene from each parent. Children who have albinism are born to parents having normal pigmentation. These parents are the 1 in 75 people who are carriers of albinism. As the parents themselves do not have albinism, but they are still able to pass abnormal gene to their child and such type of inheritance is called autosomal recessive. If two people are carriers of the albinism gene, odds increase by 1 in 4 that the child will have albinism and 1 in 2 chance that the child will not have albinism but will be a carrier and 1 in 4 chance that the child will neither be a carrier nor have albinism. This can be simply explained by DNA (a molecule that carries genetic information) in the albinism gene does not contain instructions for body to create enough pigment that is much needed to carry out various functions including vision.

1. Ocular Albinism (OA): affects only eyes and not skin or hair. This results from X-linked chromosomal inheritance and therefore occurs mainly in boys.

Prader-Willi Syndrome: What are the Symptoms and Signs of Prader-Willi Syndrome?
Symptoms of Prader-Willi syndrome include reduced muscle tone, excessive eating resulting in obesity, lethargy, growth and sex hormonal disturbances and behavioral/psychiatric disorders.
Advertisement
4. Chediak-Higashi syndrome: rare form of albinism associated with mutation in LYST gene. People in this group have abnormality in certain types of white blood cells, thereby lowering of resistance to infection. Signs and symptoms are same as in oculocutaneous albinism, however hair is usually brown or blond with silvery sheen, skin is creamy white to greyish.

5. Griscelli Syndrome: a very rare type of albinism, only 60 known cases are available worldwide. Similar to Chediak-Higashi Syndrome, there is deficiency in immune system and is associated with neurological problems.

Mutation in one of several genes is primary cause for albinism. These genes provide an instruction that is useful in making one of several proteins involved in melanin production. Melanin is produced by cells called as melanocytes, found in skin and eyes. If mutation occurs then there is no melanin produced at all or significant decline in amount of melanin. In some types of albinism, two copies of mutated gene are inherited - one from each parent, for albinism to occur. This is called recessive inheritance.

Lack of the pigment melanin mainly affects colour of hair, skin and eyes.

Skin: People having albinism have very pale skin and will usually not tan or burn easily in the sun. In some people, skin pigmentation does not change at all and for some people, melanin production may begin or rise during childhood and teen years, resulting in minor changes in pigmentation.

Eyes: Iris-the coloured part of the eye, lacks the essential pigment required for colour of the eye. Due to which people having albinism have very pale blue or grey eyes. The missing pigment can also lead to other eye conditions such as:

As albinism is a genetic disorder, there is little scope for treatment. Proper monitoring of eye and skin for any signs of abnormalities is especially important.

For eyes, if myopia, hyperopia and astigmatism, use of glasses or contact lenses may correct the problem leading to improved vision. Regular eye test would also be required to check prescription of eye glasses and contact lenses. Although surgery is rarely required part for treatment of albinism, ophthalmologist may recommend surgery on optical muscles to minimise Nystagmus. In case of Strabismus, surgery may make the condition less visible, however won't improve vision.

Lack of melanin in skin can prone to increased risk of sunburn and skin cancer, caused by direct sunlight. People with albinism should wear sunscreen having high sun protection factor (SPF) namely SPF 30. Also, going out should be avoided when it is very hot. If out in the sun, sunglasses must be worn that has UV filter and hat with loose-fitting clothing must be worn.