The global burden of TB is enormous, with an estimated 8.6 million new cases in 2012. This included 450,000 people with multidrug-resistant Tuberculosis that was associated with 170,000 deaths. 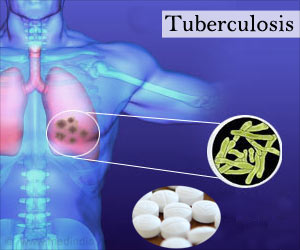 Two years ago a new drug called Bedaquiline became the first drug in the last four decades to be approved by the U.S. Food and Drug Administration for the treatment of multidrug-resistant TB. The drug works by inhibiting an enzyme used by Mycobacterium tuberculosis to replicate and spread throughout the body. While it can be a lifesaving therapy against one of the world's deadliest diseases, Bedaquiline can also cause serious side effects in the heart and liver. Therefore, strategies to reduce the dose of Bedaquiline while retaining its antibacterial activity would provide significant benefits to patients.

"Shortening treatment regimens and reducing the required doses may be a promising strategy to reduce the incidence of Bedaquiline-related adverse effects and thereby improve multidrug-resistant TB treatment outcomes," says one of the lead authors of the study Dr.Gupta.

New research conducted at the Center for Tuberculosis Research at the Johns Hopkins University School of Medicine shows that lower doses of the toxic drug Bedaquiline  given together with Verapamil, a medication that's used to treat various heart conditions  can lead to the same antibacterial effects as higher toxic doses of Bedaquiline. The combination of the two drugs could potentially shorten treatment time, reduce the side effects of Bedaquiline and improve patient outcomes for those suffering from TB.

The study will be published in the January 2014 issue of Antimicrobial Agents and Chemotherapy. The lead author is William Bishai, M.D., Ph.D., co-director of the Center for Tuberculosis Research.

"Using a mouse model of tuberculosis, we have shown lower doses of Bedaquiline together with Verapamil have the same antibacterial effect as the higher toxic doses," says Shashank Gupta, Ph.D., a research fellow at Johns Hopkins. "A lower dose of Bedaquiline will cause no or less severe side effects."

Bishai's team wondered whether giving verapamil in addition to lower doses of Bedaquiline might do the trick. Verapamil is prescribed to patients with hypertension and other heart-related conditions, because it blocks cellular channels that affect the pumping of the heart and the dilation of blood vessels. Studies have revealed that the drug also inhibits bacterial efflux pumps that permit bacteria to survive within cells. Efflux pumps contribute to multidrug resistance, because they expel antibiotics and other compounds from cells. Blocking them could open the door for shortening the course of antibiotics and for restoring their activity against drug-resistant bacterial infections.

The funding of this study came from National Institutes of Health grants AI37856, AI36973 and AI0971

With the number of hard-to-treat strains of the lung disease doubling in recent years, the World Health Organisation on Wednesday urged donors to root out multidrug-resistant tuberculosis.

MDR-TB is a Growing Concern, Says WHO

The WHO has stated that multidrug-resistant tuberculosis (MDR-TB) is a growing concern because people still do not have access to required standard diagnostic services.

Cough is a symptom of a condition usually affecting the respiratory tract. It may be acute or chronic, wet or dry. The type of cough can help the physician diagnose the underlying condition.

Extra pulmonary tuberculosis is infection of tissues and organs other than the lungs by mycobacterium tuberculosis and related organisms.

Pleural effusion is the accumulation of fluid in the space between the two coverings (pleura) of the lung. The ability of the lung to expand is affected.

Abdominal tuberculosis, which is a form of extrapulmonary tuberculosis, affects the gastrointestinal tract, spleen, pancreas, liver, peritoneum, omentum and lymph nodes adjacent to these organs.