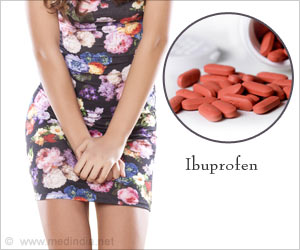 Ibuprofen treatment for urinary tract infection, instead of antibiotic use, among women has yielded positive results in a study conducted by Lldiko Gagyor and colleagues in a study published by The British Medical Journal, January 2016.

This study is a hallmark study as it shows that a non-steroidal anti-inflammatory drug can be used instead of antibiotics for a disease condition. The rampant use of antibiotics has led to serious health complications for patients as well as for others in society.


Harm Associated with Overuse of Antibiotics


1. Antibiotic Resistance - The indiscriminate use of antibiotics results in bacteria becoming resistant to these antibiotics. These antibiotic-resistant strains are very hard to treat and are threatening to affect medical treatment procedures.

2. Affect Normal Microflora of the gut - The human gut consists of microflora which are important for digesting complex food. These commensals are often lost after antibiotic therapy as these microbes are also affected. The absence of these microbes can lead to

a) Harmful Bacteria - The loss of normal microflora can result in the growth and colonization of harmful bacteria which can lead to infections.

b) Poor Digestion - The natural microflora aid in digestion and their absence can lead to loose stools and feelings of nausea.

3. Drain on Resources - The use of antibiotic drug therapy lays additional stress on medical health budgets due to higher costs.

a) Doctor's Prescriptions - The efficacy of antibiotic treatment in allaying disease symptoms and infection load prompted doctors to prescribe antibiotics even for common infections like cold. This lead to indiscriminate use of antibiotics.

b) Failure to Complete the Course of Treatment - As soon as symptoms subside, patients forgo the full drug therapy with a relapse resulting in additional drug therapy. This increases exposure to antibiotics for the individual as well as for the environment.

c) Use Of Leftover Antibiotics - Some people tend to use left over antibiotics for any other common infections that may arise a few months after receiving treatment for a major illness. This could further increase exposure to antibiotics.

The harm associated with increased antibiotic use requires a better alternative to treating infections. Nearly 25% of antibiotics prescribed in general practice are due to urinary tract infections as this is a common infection found among women. The causes for the infection range from

b) Insufficient of intake of water

d) Prolonged period of controlling the passing of urine. Women tend to avoid the use of common restrooms fearing infection, cleanliness and safety. This can increase risk for UTI

The use of ibuprofen in the treatment of urinary tract infection is thus a remarkable study that explores other avenues of treatment for this common infection.

About the Study: Uncomplicated urinary tract infections were treated using antibiotics, this study aimed at

i) Studying the effect of ibuprofen on women with uncomplicated UTI

The Results of the Study:

80 women with UTI were the study population

i) On day 4- 58.3% of patients on ibuprofen were symptom-free when compared with 51.5% in the ciprofloxacin group

These promising results led to a complete randomized controlled trial by these scientists. The symptoms that were scored during the study included

i) Frequency/ urgency for urination

The Results of the Study:

a) 67% (two thirds) of women with uncomplicated urinary tract infection were relieved of symptoms with Ibuprofen and without antibiotic treatment.

b) 34% of ibuprofen patients required antibiotic therapy after 28 days

From this study, it is evident that ibuprofen can be considered as an effective alternate treatment to antibiotic use. However, Ibuprofen use should be considered with caution and for women who

b) Were willing to delay/avoid the use of antibiotics

Patients with uncomplicated urinary tract infections who were on ibuprofen treatment were at a higher risk for pyelonephritis.

The increased promise exhibited by the use of ibuprofen in the treatment of uncomplicated UTI paves the way for an alternate method of treatment. 67% of patients on ibuprofen were successfully treated without antibiotic use and further analysis found that women with mild to moderate uncomplicated urinary tract infections displayed maximum benefit from the treatment, prompting their use among patients with comparable severity of symptoms.

Another startling study conducted on the use of ibuprofen by Obad and colleagues shows that Ibuprofen has an additional antimicrobial effect on E.coli.

The vast benefits of using Ibuprofen shows promise in its use in the treatment of mild to moderate uncomplicated urinary tract infection among women, with further studies and trials required to support the existing evidence. Though there have been herbal formulations which are stated to treat UTI without the use of antibiotics, the use of Ibuprofen, which is a commonly used anti inflammatory drug, are reassuring steps away from antibiotic use in common infections.

New Research Could Help to Prevent Urinary Tract Infections
Researchers from the University of Southampton identified four clear stages to the development of a crystalline biofilm, which leads to encrustations.
READ MORE

Worlds First Patch Form of Ibuprofen Paves Way for Transdermal Drug-Delivery
Ibuprofen patch can be stuck on the patient's skin where it delivers the drug directly to the regions in need of this drug at consistent dose rate.
READ MORE