A healthy lifestyle that includes regular physical activity, nutritious diet, and a normal body mass index have all been linked to help people stay healthy as they age. These factors may also help reduce the risk Alzheimer's disease, says a new study by researchers at UCLA's Semel Institute for Neuroscience and Human Behavior.

Alzheimer's Disease is a progressive brain disorder that destroys memory and thinking abilities. Alzheimer's is the most common cause of dementia that causes loss of cognitive function and behavior abilities. Plaques and tangles are some of the features of Alzheimer's disease. Plaques are abnormal clumps called beta-amyloid protein that deposit in the spaces between nerve cells in the brain. Tangles are bundles of fibers called tau that are found within the brain cells.


Age is the non-modifiable risk factor for Alzheimer's disease. The symptoms of Alzheimer's usually occur in people in their mid-60s. Over 5 million Americans suffer from Alzheimer's, which is also the sixth leading cause of death in the United States. Alzheimer's cost more than $200 billion in health care every year.


‘Healthy diet, regular physical activity, and normal body weight reduce the formation of plaques in the brain of people with subtle memory loss but with no dementia.’


Can a Healthy Lifestyle Reduce Protein Build-Up in the Brain?

Researchers at UCLA's Semel Institute for Neuroscience and Human Behavior conducted a study that included 44 adults between the ages of 40 to 85 with mild memory changes but without dementia. The participants underwent an experimental type of PET scan to measure the level of plaque and tangles in the brain. The participant's information on body mass index (BMI), levels of physical activity, diet and other lifestyle factors were also collected for the study.

The results of the study showed that lifestyle factors such as normal BMI, physical activity, and a Mediterranean diet reduced the levels of plaques and tangles on the brain scans. Mediterranean diet consists of fruits, vegetables, whole grains, legume, nuts, and moderate consumption of fish, lean meat, dairy products and replacing saturated fats with olive oil and canola oil.

Dr. David Merrill, the lead author of the study, said, "The fact that we could detect this influence of lifestyle at a molecular level before the beginning of serious memory problems surprised us."

"The study reinforces the importance of living a healthy life to prevent Alzheimer's, even before the development of clinically significant dementia. This work lends key insight not only into the ability of patients to prevent Alzheimer's disease, but also physicians' ability to detect and image these changes," said Merrill.

The researchers hope to conduct further studies in the future that combine imaging with intervention studies of diet, exercise and other modifiable factors such as stress and cognitive health. The study will appear in the September issue of the American Journal of Geriatric Psychiatry. 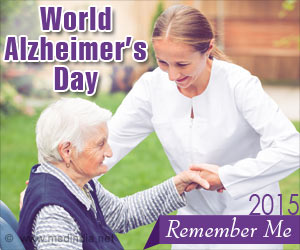 Healthy LivingGardening and Horticultural Therapy for the Young and the OldYour Simple Guide to Looking, Feeling and Being HealthyHealthy Gifting Ideas for DiwaliCommon Lifestyle Habits that Cause DiseasesDementia
Sign up for Wellness Consult a Doctor Sign up for Selfcare