Written by Amrita Surendranath, B.Sc, M.Sc.
Article Reviewed by The Medindia Medical Review Team on May 8, 2017 at 4:28 PM
Health In Focus

Some people tend to crave sweets and chocolates while others may not be as likely to prefer sweets. A study conducted by a research team from The University of Copenhagen's Novo Nordisk Foundation Center for Basic Metabolic Research found that a hormone called FGF21 was secreted by the liver after the consumption of sweets, and that this could be used to determine who loved sweets and who didn't.

The study was published in the journal Cell Metabolism and it showed that people with certain variations of the FGF21 gene were about 20% more likely to be high sweet and candy consumers, which included gum drops, chocolates and ice cream.
Have a Sweet Tooth? Hormone Regulating Sugar Craving Identified


The study leader, Dr. Matthew Gillum , who is an assistant professor of biological sciences said that data was obtained after assessing 6,500 Danish subjects and was useful in identifying the hormonal basis of a sweet tooth.

Role of Liver in Food Intake

The study played an important role in understanding the influence of the liver in regulating the food that is eaten. Nutrients from the food pass into the liver after they pass through the stomach and the intestine. The study found that
Dr. Gillum stated that the liver could be a regulatory system that could control the different nutrient systems. Previous studies showed that
Dr. Gillum and colleagues wanted to determine if the association between a sweet tooth and the levels of the FGF21 hormone were only among rodents or if they were also present in humans.


‘FGF21 hormone is associated with satiety or feeling of fullness on eating sugar. The more the level of FGF21 hormone, the lower the craving for sugar.’

The research team used data from a study called Inter99 which utilized self-reported dietary intake along with measurements of serum cholesterol and glucose from participants. The FGF21 gene of the study participants was sequenced to identify the gene polymorphism; 2 variants of the gene that were linked to carbohydrate intake in previous studies were focused on.

The study found that
Association of FGF21 Hormone and Sweet Intake

A clinical study was set up by Dr. Gillum and colleagues to identify how the hormone levels regulate sweet intake. 51 people from the study who strongly liked or strongly disliked sweets were included in the study.
The study found that
The study provided insights into the probable association between sweet intake and the level of the FGF21 hormone. The scientists involved in the study will be carrying out a larger study to fully understand the effect of this gene on sugar intake.

Sugar is believed to be discovered by Indians and its consumption is a part of the Indian culinary practices. From sweets to drinks to even curries, most dishes have a dash of sugar. India is the second largest producer and consumer of sugar in the world. The high intake of sugar has led to a host of conditions like obesity and type 2 diabetes. Considering the high pre-disposition for diabetes and obesity in India, it is important to lower consumption of sugar to less than 10% of the daily energy intake.

The identification of FGF21 hormone in regulating sugar intake could play an important role in treating people with a 'sweet tooth'. 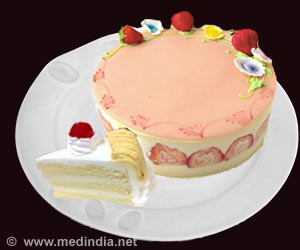 Eating Dessert Before Food Might Help You Eat Less
Eating desserts prior to meal can help you control your diet. It entirely depends on one's willpower and determination to avoid food.
READ MORE

Food Cravings
Cravings often signify some need-whether nutritional or mental. Read on to find out if it's really your sweet tooth or something else.
READ MORE

Amyotrophic Lateral Sclerosis (ALS)Sugar: Time to Look beyond Its SweetnessFood CravingsTips for Healthy Fasting During Ramadhan