Gut microbiota sampling and analysis in infants could be useful in predicting the risk of becoming overweight or obese during childhood, a new study suggests. The research findings were published in mBio, a publication of the American Society for Microbiology.

The research found that the gut microbiota at 2 years of age was linked to the body mass index (BMI) at 12 years of age. Moreover, the BMI of 2-year olds was not significantly higher in 12-year olds, who later became overweight or suffered from obesity. This is indicative of the fact that gut microbiota could be the first predictor for the future occurrence of obesity.
Gut Microbiota in Infants Linked to Future Obesity

Dr. Maggie Stanislawski, PhD, is a Research Associate at the Lifecourse Epidemiology of Adiposity & Diabetes (LEAD) Center, University of Colorado Anschutz Medical Campus, Colorado School of Public Health, Aurora, Colorado, USA, and is also the lead author of the study.


‘Gut microbiota in infants is capable of predicting later obesity in children. Analysis of gut bacteria and its correlation with BMI in the same cohort at age 12, many of whom had become obese, helped to establish the predictive value. This could help develop tools for the early detection of children before the onset of obesity.’
Read More..


She said: "Our study provides more evidence that the gut microbiota might be playing a role in later obesity. If our findings can be confirmed by other studies, the gut microbiota might play an important part of the obesity prediction algorithm, to identify at-risk kids early in life, before they start to gain any excess weight that might put them at risk for later obesity."

This study was preceded by several other studies, which demonstrated that gut microbiota plays a crucial role in obesity and could actually be responsible for causing it.

The NoMIC Study, which began way back in 2002, is headed by Dr. Merete Eggesbø, MD, PhD, at the Division of Epidemiology, Norwegian Institute of Public Health (NIPH), Oslo, Norway. The University of Colorado scientists collaborated with Dr. Eggesbø and her team at NIPH and analyzed data from 165 infants, who had their BMI measured when they had reached 12 years of age.

The NoMIC birth cohort is one of the very first in the world. The aim is to investigate the gut microbiome of infants and includes approximately 550 children who are now in their teens. The present study recruited infants and their mothers at the time of birth. Upon reaching 12 years of age, 20 percent of the 165 children included in the study cohort were either overweight or obese.

The researchers measured the BMI of the children at the age of 12 years and compared them to gut microbiota samples collected at 6 time points after birth - day four, day ten, one month, four months, one year, and two years. The researchers sequenced the 16s rRNA gene of all the gut microbiota samples and looked for bacteria belonging to specific taxa that could predict the later BMI values at the various time points.

The study found qualitative differences in the composition of the gut microbiota samples at day ten and at two years. These were associated with BMI z-scores at the age of 12 years. The BMI z-scores measure the relative weight after adjusting for the age and sex of the child. The researchers also examined the variations in the BMI z-scores to see how much could be explained by the early childhood data on gut microbiota taxa.

Dr. Stanislawski said: "At the early time points, there was somewhat of a relationship between the gut microbiota taxa and later BMI, but the relationship was much stronger as the kids got older." She added: "At one year, it was stronger than the earlier time points. At two years, it was the strongest. We found this very interesting because, at two years, there wasn't any obvious phenotype in terms of whether or not the kids were going to become obese. Kids who became obese later in life didn't have high BMI z-scores at age two. The findings suggest that the gut microbiota phenotype was present before any overt sign of overweight or obesity. Since, the gut microbiota is influenced by diet, this association could also reflect dietary choices that are precursors to obesity."


Limitations of the Study

A major limitation of the study was that the entire study cohort was of Norwegian descent. Therefore, there is a need to repeat the study in other cohorts around the globe. If these study results can be replicated by other studies, then this could provide a screening tool for identifying at-risk children even before the signs of obesity show up. In this context, it should be noted that preventing obesity is much easier than reversing it.


Implications of the Study

The major implications of the study pertain to the incomplete understanding of our gut microbiome. This is because the study revealed that gut microbes that were previously thought to be healthy for both children and adults were associated with higher BMI during childhood, indicating that they could cause obesity later on. This underscores the need for a more comprehensive understanding of the dynamics of gut colonization by bacteria.

In this regard, Dr. Stanislawski was of the opinion that it might be detrimental to give probiotics to infants, which is often the practice. She believed that giving babies the same types of bacteria daily, could lead to overpopulation of the gut with just a couple of strains of bacteria, thereby preventing colonization with other bacterial strains that could provide added health benefits. She indicated that a balanced diet with lots of different types of vegetables and dietary fibers could improve the gut microbiota appreciably as the gut bacteria would be exposed to a wide variety of nutrients for them to feed on, thereby helping them to flourish within the gut.

In the future, the researchers plan to examine the bacterial colonization process in order to find other markers of gut health in children. They will specifically focus on the temporal dynamics of the gut microbiota during the first two years of childhood.

C-sections and Gut Bacteria May Up Childhood Obesity Risk
An overweight or obese woman when delivering vaginally, the risk of overweight in her child is three times higher, and when giving birth via cesarean-section (C-section), the risk is five times higher than usual.
READ MORE 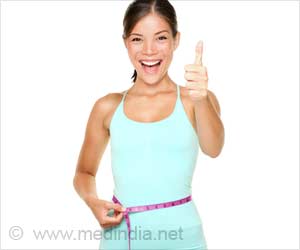 Healthy Lifestyle in Childhood can Balance of Gut Bacteria in Teens
Teenagers who ate less fat and more carbohydrates, exercised regularly and had adequate sleep during their childhood had a healthier and more diverse composition of gut microbiota.
READ MORE 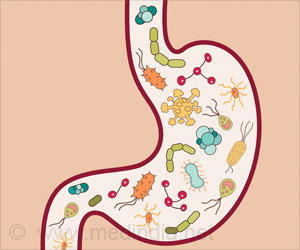 Gut Microbiota in Obese Teens Differ from Normal Weight Peers
Teenage obesity may be linked to gut microflora. Children and teenagers with obesity have a different composition of gut flora than lean youth, claims a study.
READ MORE