Written by Suchitra Chari, M.S. M.Sc.
Article Reviewed by The Medindia Medical Review Team on June 6, 2018 at 11:53 AM
Health In Focus

Researchers at the Université de Montréal-affiliated CHU Sainte-Justine Children's Hospital and a master's student in epidemiology at McGill University suggest that vaccinating asthmatic kids against flu can help the patients respond better to asthma medication and prevent hospitalization.

An asthma-prone person weakened by the common cold or the flu, responds poorly to emergency treatment when suffering an asthma attack; in some cases, they may even need to be hospitalized. This is especially true for preschoolers.
Flu Vaccine Reduces Risk of Hospitalization After Asthma Attack


The researchers say that getting an annual flu shot can help ward off the double whammy of an asthma attack and a respiratory virus.


‘Children suffering from an asthma attack might be able to respond better to medication and and stay out of hospital if they have already been vaccinated against influenza.’


"These kids should get their flu shot and they should get it systematically - it's worth it," said study co-author Francine Ducharme, a pediatrician and clinical epidemiologist at CHU Sainte-Justine who is a professor of pediatrics at UdeM.

The study is published in the journal Pediatrics.

The study was conducted by Ducharme and colleagues between 2011 and 2013 with funding from the Canadian Institutes of Health Research.

The researchers looked at around 1,000 children treated for moderate or severe asthma attacks in emergency rooms at Sainte-Justine, the Montreal Children's Hospital, and three other Canadian hospitals. They took nose swabs from the children and analyzed them to see if the children were also infected by the flu or other respiratory viruses when they came to the ER. To their surprise, they found infections in around two-thirds of the kids.

The kids were treated with standard treatments for their asthma attacks (oral corticosteroids and inhaled bronchodilators).
"We now know that if these kids get the flu the risks are very high that emergency treatment for an asthma attack will fail," said Ducharme. "Instead of having an overall 17-per-cent risk of treatment failure, with flu their risk rises to almost 40 percent."

"The more than 20-per-cent higher absolute risk of treatment failure in flu cases is very significant," says Caroline Quach, an associate professor of microbiology and infectious diseases at UdeM, chair of the Quebec Immunization Committee and chair of the National Advisory Committee on Immunization of the Public Health Agency of Canada. This study is the first to determine the risk associated with not responding to asthma medication with specific viruses like influenza and rhinovirus.

Influenza is the only respiratory virus that is vaccine-preventable, and it would be wise for kids with asthma to get vaccinated yearly, in the fall, before flu season starts. In Quebec, where the study was conducted every child who is diagnosed with asthma is eligible for influenza vaccination but many parents do not make use of the opportunity due to accessibility issues and the time taken to make an extra trip to a CLSC or public-health clinic.

Only 60 percent of the people get the shot nowadays. Quach feels that this issue can be solved if the flu vaccine is available on site at the asthma, respiratory or general pediatric clinics at Sainte-Justine.

In fact, Quach and her student Joanna Merckx, then a McGill clinical fellow in pediatric infectious diseases have already run a free flu-vaccination clinic in the premises of the Montreal Children's Hospital from 2012 to 2014 and had great success immunizing 2,640 kids who had high-risk conditions like asthma. It was easier to get hold of children coming in for their regular visits and give them the flu vaccine.

The researchers claim that even if flu vaccines have their drawbacks, public-health policy makers have to make it easy for parents to get their children vaccinated, and encourage them to do so.

The chronic disease often starts in the pre-school years, even before the kid reaches six years of age.

"Everybody who has an asthmatic child should hear that influenza is bad news - the child might have an attack that needs hospitalization," Quach said. "They need to ask for the flu vaccine yearly."

Asthma is a chronic condition where the bronchial tubes (the main passageway through which air enters and leaves the lungs) get inflamed and becomes narrow making it difficult for the person to breathe. The condition is characterized by coughing, shortness of breath, tightness in the chest and wheezing. The symptoms affect around 26 million Americans and 3 million Canadians. It is one of the leading causes of absences from work and school.

There are two types of asthma. One is allergic or extrinsic asthma caused by exposure to an allergen such as pollen, pet dander, dust mites, and mold. The other kind of asthma is nonallergic or intrinsic asthma caused by triggers such as stress, exercise, colds, the flu, extreme weather conditions, irritants in the air like smoke and chemical fumes or certain medications and food additives.

Asthma is best managed by prevention; a person prone to an asthma attack should be aware of what situations can trigger an attack and try to avoid them.

Influenza Virus Vaccine
This medication is an immunization agent, prescribed for children aged 6 months and older against influenza caused by influenza ...
READ MORE 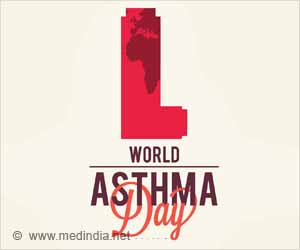