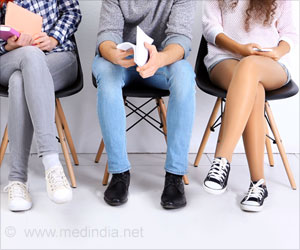 The habit of making small movements of legs while sitting has shown to be beneficial to the arteries in the legs and provide protection against cardiovascular disease. As annoying fidgeting maybe to those around, researchers have asked people who spend most of their time at office desk to continue with the mild toe-tapping and thumb-twiddling.

Researchers from the University of Missouri found that fidgeting while sitting improves the vascular function.

Vascular Risk Lower Among Native American Indians of the Southwest Region
American Indian and Alaska Native (AIAN) communities in the United States are aging, where their population is projected to reach almost 918,000 by 2050.
Advertisement
‘Leg tapping while sitting could help improve heart health by boosting the vascular function.’

"Many of us sit for hours at a time, whether it's binge watching our favorite TV show or working at a computer," said Dr. Jaume Padilla, an assistant professor of nutrition and exercise physiology at MU and lead author of the study. "We wanted to know whether a small amount of leg fidgeting could prevent a decline in leg vascular function caused by prolonged sitting. While we expected fidgeting to increase blood flow to the lower limbs, we were quite surprised to find this would be sufficient to prevent a decline in arterial function."

Restless Legs Syndrome Patients Respond Better to Placebo Interventions
Placebo effect on efficacy outcomes observed in a significant number of patients of Restless Legs Syndrome (RLS) in a recent review.
Advertisement
The participants moved their feet 250 times per minute. The researchers then measured the blood flow of the popliteal, an artery in the lower leg. They found that in the leg that was moved, the rate of blood flow had increased and the blood flow in the stationary leg had reduced.

The study that appears in the American Journal of Physiology, states that an increased blood flow and the sheer stress that occurs along with it is important for vascular health. Sheer stress is the friction of the flowing blood on the arterial wall.

Prolonged sitting, especially among older people, is known to cause deep vein thrombosis. It is a condition where a clot forms in the deep vein of the leg. It can cause symptoms like swelling, ache, redness and warmness. But in some cases, it can cause pulmonary embolism which occurs when the clot detaches and travels to the lungs.

The researchers proposed taping both legs though benefits of only one leg fidgeting were proved. "You should attempt to break up sitting time as much as possible by standing or walking," Padilla said. "But if you're stuck in a situation in which walking just isn't an option, fidgeting can be a good alternative. Any movement is better than no movement."

The protective role of fidgeting is yet to be established. Researchers also warn that it cannot substitute walking or exercise that provides greater benefits to cardiovascular function.

Quiz on Healthy Heart
Heart disease is a major killer worldwide in spite of major strides in the medical field in terms of research, diagnosis, treatment and pharmacology. HIV/AIDS and Alzheimer's disease are vying for popular attention these days and people tend to sideline or neglect healthy heart awareness. Take our quiz and refresh your awareness on heart disease.

Tips to Prevent Heart Attacks
Heart Attack occurs when the flow of oxygenated blood to heart muscles is hindered or stopped due to built-up of plaques in coronary arteries. Heart Attack is the No.1 killer among Indians.

A-Z Drug Brands in India Blood Donation - Recipients Diaphragmatic Hernia Pregnancy Confirmation Calculator Find a Doctor The Essence of Yoga Daily Calorie Requirements Color Blindness Calculator Hearing Loss Calculator Sinopril (2mg) (Lacidipine)
This site uses cookies to deliver our services. By using our site, you acknowledge that you have read and understand our Cookie Policy, Privacy Policy, and our Terms of Use