Extreme Exercise Not a Threat to Athletes

Regular high volume and high-intensity exercise does not increase the risk of heart disease or death and has many health benefits according to a recent collaborative study conducted by the University of Texas Southwestern Medical Center and Texas Health Presbyterian Hospital Dallas. The study was led by Sports cardiologist Dr. Benjamin Levine, a Professor of Internal Medicine and Director of the Institute for Exercise and Environmental Medicine.

"The question has never been whether exercise is good for you, but whether extreme exercise is bad for you. For the past decade or so, there's been increasing concern that high-volume, high-intensity exercise could injure the heart. We found that high volumes of exercise are safe, even when coronary calcium levels are high," said Dr. Levine.
Extreme Exercise Not a Threat to Athletes


The findings of the study appear in the journal JAMA Cardiology.

It is widely believed that high-intensity exercise can damage the heart. The study was carried out to test the effects of high-intensity on the heart as well as other effects.


‘High-intensity athletes were more likely to have more calcium levels within the heart but this does not increase their risk of heart disease or death and high-intensity exercise is safe and carries many health benefits.’
Read More..


For the study, data were obtained from the Cooper Center Longitudinal Study.

Coronary calcium is a marker of atherosclerosis, a condition in which plaque builds up in the walls of the coronary vessels supplying the heart and can result in heart attack or stroke. If coronary calcium is found in the heart, it indicates that blood vessel narrowing has begun.

Coronary calcium scanning is an imaging test to determine the amount of calcium that is deposited in the heart and its blood vessels. It helps doctors to classify patients who are otherwise healthy without cardiac symptoms as low, intermediate, or high risk for an adverse heart event e.g heart attack. Based on the results of the scan, the doctor can initiate interventional measures such as medications, lifestyle changes or both.


Takeaways From the Study

"The known benefits of regular physical activity in the general population include decreased mortality, heart disease, diabetes, and many other medical conditions which reminds us how important it is to participate in regular physical activity as recommended by the 2018 Physical Activity Guidelines," said Dr. Laura DeFina, Chief Scientific Officer of The Cooper Institute and co-author of the study. 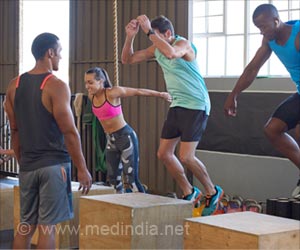 All You Need to Know about High Intensity Interval Training
HIIT alternates between low and high-intensity workouts, thereby burning more fat and is much better than cardio exercises.
READ MORE