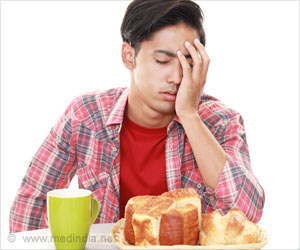 Oxidative stress and abnormal cholesterol levels are common factors in students with eating disorders, finds a new study published in the Journal of Eating Disorders.

According to researchers at the University of Mysore, the study is the first of its kind in India. Studies that involve oxidative and nitrosative stress and total lipid profiling of individuals with eating disorders have not been carried out in the country.


Researchers conducted a survey using eating attitudes test and binge eating scale among as many as 1600 students in Mysore, South India. Among the 417 students who scored high scores in the survey, 35 students were recruited as participants. Also, 35 students with very low scores participated as controls. Detailed computerized analysis finds augmented activities of reactive oxygen species (ROS) in participants.

Eating disorders represent unbalanced and improper eating practices as a result of severe fixation on one's physique. Eating disorders are results of exposure of an adolescent mind to over-publicized fitness body pictures on different platforms of mass media. The Academy of Eating Disorders stresses that eating disorders should be given equal importance as that of bipolar disorder, schizophrenia and depression. These illnesses belong to the same category called Biologically Based Mental Illness.

Chemically reactive molecules containing oxygen are known as ROS. They include peroxides, superoxide, and hydroxyl radical. ROS are generated as a natural byproduct of the normal metabolism of oxygen. They play a vital role in cell signaling and homeostasis. However, during times of environmental stress, ROS levels can increase dramatically. Environmental stress emerges when changes in the environment lay a strain on an organism. High ROS levels may result in significant damage to cell structures. This condition is known as oxidative stress. Stressors that cause oxidative stress include:

To neutralize ROS, enzymes like catalase (CAT), superoxide dismutase (SOD), and glutathione peroxidase build the body's defense system. The evaluation of lipid peroxidation (LPO) by-products and these enzymes can help identify the extent of oxidative stress existing in a person. Also, nitrosative stress plays a significant role in the advancement of these disorders.

Earlier reports have revealed the presence of both oxidative stress and nitrosative stress among patients with Anorexia Nervosa (AN), an eating disorder characterized by a low weight and fear of gaining weight.

The analysis of CAT and SOD found that both the subject groups showed reduced catalase activity but an augmented SOD activity when compared to the controls. Malondialdehyde (MDA), a by-product of lipid peroxidation was found to be present in all the study groups. The difference between the groups in this case was statistically significant. Nitric oxide synthase NOS scavenging activity was higher in the participants than in controls.

Some of the dangerous diseases caused due to oxidative stress include:

Lipid or cholesterol is a fat that your body needs to work properly. High lipid levels in your blood can increase your chance of getting heart disease, stroke and other conditions.

A recent study published in the Nutrition Research and Practice has found that the risk can be reduced by following a antioxidant- and fiber-rich vegetarian diet. The study involved forty-five vegetarians (23 men and 22 women), who had maintained a vegetarian diet for a minimum of 15 years, and 30 omnivores (15 men and 15 women).

Oxidative Stress Has a Role in Detrimental Effects
In mice, although muscle cells did not reduce in size or number lacking a protective antioxidant protein, they were weaker than normal muscle cells.
READ MORE