Researchers from Columbia University Medical center have provided strong evidence that drugs meant for arthritis or bone marrow malignancies can now be used for hair regrowth among patients with alopecia areata (spot baldness).

The study showed that there was a 92% chance of hair regrowth when the drug was tested among 12 patients. Separate studies with similar drug were conducted by researchers from Stanford University and Yale University.


Director of the Clinical Research unit in Columbia, Dr. Julian Mackay-Wiggan said "Although our study was small, it provides crucial evidence that JAK inhibitors may constitute the first effective treatment for people with alopecia areata. This is encouraging news for patients who are coping with the physical and emotional effects of this disfiguring autoimmune disease."


‘Ruxolitinib and tofacitinib can be used to regrow hair and build confidence.’

Alopecia areata is an autoimmune disorder where the body's immune system fights against its own cells, in this case the hair follicles, leading to the loss of hair in patches.

This condition occurs both in males and in females, even children have been found to be affected. The loss of hair in patches could be a very small patch or it can lead to the loss of total hair, even on the eyebrows.

Though this condition is not life-threatening, the emotional implications are considerably huge, as an individual's hair is considered their crowning glory.

There is no known cure for this condition and the hair can never be fully restored. The study by the Columbia University researchers would aid in improving the condition of such patients, who will benefit emotionally from the restoration of hair.

Study of Ruxolitinib on Alopecia Areata

Columbia University researchers used ruxolitinib, which is a drug used for bone marrow malignancies, on 12 patients with alopecia areata with more than 30% of hair loss.
Results:
Skin biopsy showed
Patients who did not respond to treatment had lower levels of inflammatory markers, which can be used as an indicator for responders and non responders.

Dr. Angela M. Christiano who is the Professor of Genetics and Development at Columbia University Medical Center said "We are very excited about the use of biomarkers to follow the response of patients to this treatment. This will allow us to so monitor improvements in their gene expression signatures even before hair growth appears."

Study of Tofacitinib on Alopecia Areata

There were minor side effects that were caused due to the use of these drugs that included skin infections, skin allergy and lowered hemoglobin levels that were reversed when the dosage of the medications were adjusted.

These drugs hold a lot of promise in the treatment of alopecia areata that has greatly affected the self perception of many patients worldwide. The psychological ramifications of this condition, far outreaches the physical implications, with the identification of this drug, promising to raise hopes of a cure. 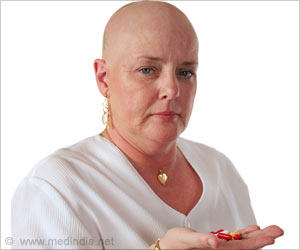 New Lease of Life for Alopecia Patients
A drug which is used to treat a rare type of bone marrow cancer has also been found to restore hair in some patients with persistent hair loss or alopecia areata, a new study found.
READ MORE