Dietary Phenols Could Play a Role in Cancer Treatment 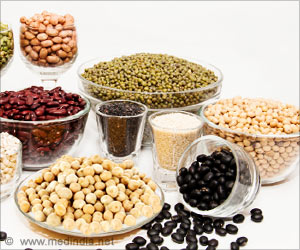 Diet to Prevent Colon Cancer
Diet and lifestyle play an important role in reducing the risk and delaying the onset of cancer. Incorporating and eliminating certain other foods may reduce the risk of acquiring colon cancer.
Advertisement
‘Dietary phenols obtained from foods such as cereals, legumes, soybeans, coffee, rosemary could play key role in the prevention and treatment of cancers.’

The benefits of phenolic compounds in the prevention and treatment of cancer have been demonstrated in various experimental studies.


In in vitro studies on proliferating cells in the laboratory, phenolic compounds have been found to:


There are several ways in which the plant phenols could bring about these effects:

Diet, Exercise Reduces Protein Levels Associated With Cancer
Overweight and obese women who lost weight through diet and exercise lowered the levels of certain proteins in their blood that promotes cancer growth.
Advertisement

Though the toxicity of phenol compounds may be less than that of several drugs currently used in the treatment of cancer, the researchers suggest that they may not be entirely safe.

Several studies are still required before the phenolic compounds can be definitely proved to be useful in cancers.

Therefore, rather than generalizing, it may be necessary to test the potential in each phenolic compound separately for its effectiveness in cancer. The phenolic compounds will also have to be tested in clinical trials before they can be used in the treatment of cancer, and also in other conditions where they have a potential benefit like cardiovascular and neurodegenerative diseases.

Benefits of a Vegan Diet for Fighting Cancer
A vegan diet consisting of fruits, vegetables and other plant-based food sources has been shown to help prevent and fight many types of cancer.

Vegetarian Diet may Increase the Risk of Cancer and Heart Disease
People who have followed a vegetarian diet for generations were found to be far more likely to carry DNA, which makes them susceptible to inflammation.

Tattoos A Body Art
News Archive
News Resource
News Category
Milestone In Voluntary Blood Donation Achieved Samsung Reinvents Toilet for the Poor Which is a Better Form of Exercise: Daily or Weekly? First Phase of Foot-and-Mouth Disease Vaccination Shocking News: Polio Cases Return After a Decade in the US
More News
Sign up for Wellness Consult a Doctor Sign up for Selfcare