Combining Drug for Virus and Arthritis Found Effective in Chikungunya

A new combination of drugs was found to eliminate chikungunya arthritis in a study conducted by a research team from the Washington University School of Medicine in St. Louis. The scientists used a combination of drugs for chikungunya virus and a drug for rheumatoid arthritis. This could herald a new line of treatment for the painful condition which is currently devoid of any treatment options.

Associate professor of medicine, Dr. Deborah Lenschow who is also the co-senior author of the study said that the scientists found that a combination of these two drugs could completely remove arthritis in mice in the acute phase of the disease. This is the phase that occurs during the first three weeks of the infection and is characterized by debilitating pain.
Combining Drug for Virus and Arthritis Found Effective in Chikungunya


The study that was published in the journal Science Translational Medicine could provide a potential drug therapy for chikungunya arthritis. The chikungunya virus was restricted mainly to South Asia and East Africa till about ten years ago but it has spread across the world. In late 2013, it was found for the first time in the Western Hemisphere and soon, by the end of 2015, it was found to have infected about 1.8 million people in America.


‘Prospective therapy for chikungunya could be a combination of arthritis and anti-viral drugs.’


The symptoms of the disease, which is transmitted by mosquitoes, include rash, fever, muscle pain and fatigue with most people continuing to be affected by joint pain even after 6 months of the start of infection. In some cases, severe arthritis may continue for many years after the initial infection.

Dr. Lenschow and Dr. Michael Diamond, who is the co-senior author of the study, along with colleagues tested six rheumatoid arthritis drugs, which were approved by the Food and Drug Administration. The panel of drugs was tested on mice with chikungunya arthritis.

The main mechanism of action of all the six drugs was to suppress the immune system, but by following different pathways of action.

Chikungunya virus was injected into 7 groups of mice by the research team at the start of the study. After a period of three days, the mice were injected with one of the six arthritis drugs or a placebo. The research team measured
The findings of the study were
Dr. Herbert S. Gasser who was a part of the research team that conducted the study and who is a professor of medicine said that there were concerns initially about using immunosuppressive drugs as they could block the immune system from eliminating the viruses, resulting in the increase in the viral load. This is normally the case with other viruses, however, the chikungunya virus did not respond to an increase in numbers, which could indicate that the drug could be safely trialed in humans.

The treatment of chikungunya arthritis was only successful in part which the researchers believe could be increased by the addition of human antibodies against the virus.


Chronic Phase of the Disease

The chronic phase of chikungunya among humans begin three weeks after the initial infection and can last for as long as three to four years when the joint pain still exists. However, unlike in the acute phase, the virus may not be present in the blood, but the viral genetic element present could continue to trigger the immune system to cause tissue damage, manifested as arthritis.

Absence of Elimination from Chronic Phase

In mice that were treated with a combination of the drugs, both anti-viral drug and drug against arthritis, the live virus was no longer found after 4 weeks of the infection. However, the viral genetic material was found in the joints, which is indicative that the drug combination did not affect the chronic phase of the disease.

The first few weeks after infection seem to be the crucial phase and the scientists believe that the administration of the drugs against arthritis could prevent the infection from entering the chronic phase.  Since there is no current treatment for the joint pain associated with chikungunya, this treatment method could provide some relief. Dr. Lenschow is keen on beginning human trials in Brazil soon to determine the effectiveness of the treatment methodology.

The acute phase of the disease is characterized by high fever and joint pain, so an effective means of treatment afforded by such drug combinations would benefit patients and limit pain and discomfort, however, treatment for the chronic phase may require further studies. 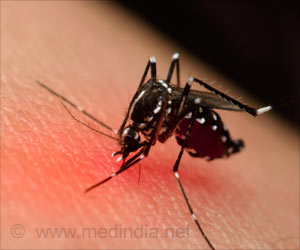 Worlds First Chikungunya Vaccine Developed From Insect-Specific Virus
A safe and effective Chikungunya vaccine has been developed from an insect-specific virus that does not affect people.
READ MORE

Chikungunya can Affect Your Eyes too
Eyes are affected in the form of conjunctivitis, uveitis or episcleritis, retinitis and optic neuritis wherein the white portion of the eye becomes red.
READ MORE