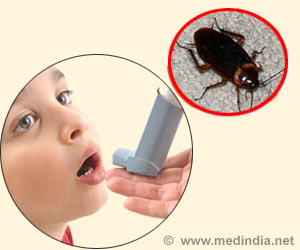 Cockroaches have protein in their saliva feces and body parts. This protein acts as an allergen for causing asthma. When inhaled these proteins enter the respiratory tract and cause allergic reactions such as skin rashes or asthmatic attack.

Devid Peden, director of the Center for Environmental Medicine, Asthma, and Lung Biology at UNC School of Medicine, said that in contrast to cats and dust mites, cockroach allergies result in serious repercussions and emergency trips to hospital. However cockroaches are only a part of the story. A recent research published in the Journal of Allergy and Clinical Immunology revealed that 'exposure to a certain type of air pollutant found in diesel exhaust and other combustion-related byproducts can increase the likelihood of developing a cockroach allergy'.


The scientists studied polycyclic aromatic hydrocarbons, a class of combustion byproducts which is released by the engines of trucks and buses.

Perzanowski, the paper's lead author mentioned, "Asthma research has been going on for a long time, and we haven't found a smoking gun for why asthma has increased."

He added, "This isn't a smoking gun. What it suggests is that this is a complicated story."

The research also showed exposure during the pregnant state can affect the immune system of the child. This exposure puts the child at the threat of being affected by cockroach allergy and consequently asthma.

The scientists targeted non-smoking females for the first seven years of their child's lives. These females lived in the Northern Manhattan and South Bronx.

The duct samples were collected from the kitchens and beds of these women during the third trimester of pregnancy and when their kids were 1, 3 and 5 years of age.

The dust samples were tested for the presence of cockroach allergens.

The air was also tested for the presence of polycyclic aromatic hydrocarbons.

'Scientists collected dust from the beds and kitchens of these women during their third trimester of pregnancy and again when the children were 1, 3 and 5 years old. All dust samples were tested for the cockroach allergens.

Researchers also sampled the air for the presence of polycyclic aromatic hydrocarbons and took blood tests to check for the GSTM1 gene mutation and allergies.'

The scientist discovered that high level of cockroach allergen were responsible for allergy in kids of those mothers who were exposed to combustion byproducts during pregnancy and this risk was more pronounced in those with genetic mutation.

Peden , a member of the research team said, "Studies have shown that diesel exhaust, a source of PAH, shifts the immune response so that you're more highly allergic."

He further said, 'The GSTM gene mutation, known as GSTM1, plays a role in the body's ability to detoxify these pollutants. And it's an extremely common mutation -- as many as 40 percent of people have it.'

Peden stated, "GSTM1 is found across genders and ethnicities. The race risk is the human race. It's a pretty huge polymorphism that results in a pretty big chunk of the population."

The significance of this research paper is that it highlights an important fact that no single factor is responsible for the occurrence of asthma. There is a multitude or mix of risk factors that are accountable for increasing the chances of asthmatic attack.

According to Peden a combination of pollutant exposure and cockroach exposure can result in increasing the chances of allergic asthma.

Cockroaches and Mice can Raise Asthma, Allergy Risk in Kids
A new study has shown that developing antibodies to cockroach and mouse proteins is linked to a greater risk for wheeze, hay fever, and eczema in preschool urban children as young.
READ MORE