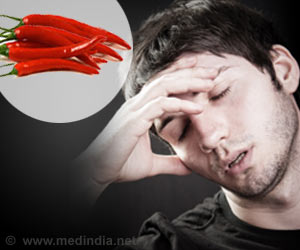 There appears to be a link between how the skin reacts when rubbed with chili oil and what happens in the brain during a migraine. This fact is being dived into by researchers at the world's largest biotechnology company, Amgen Inc. so as to produce the debilitating headache's painful symptoms.

Migraine is a common form of headache where the pain can be so severe that ones' daily activities can be hampered severely. Migraine headaches are thought to arise from enlargement of blood vessels and the release of chemicals from nerve fibers surrounding them. Though a number of drugs are used to relieve or prevent migraine headaches, none have been developed specifically for the treatment of migraines.

Amgen and other biotechnology companies are trying to develop a drug that blocks particular receptors in the brain from receiving 'pain messages'. They are targeting a chemical released during migraine; these chemicals are associated with transmission of pain signals. Pain-signal transmission in migraine appears to be similar to what happens when chili oil touches the skin. Capsaicin in chili stimulates the release of proteins called calcitonin gene-related peptides, or CGRP. CGRP causes an increase in blood flow to the affected area.


A drug that can either block the concerned receptors in the brain or mop up the CGRP itself can prevent migraine, believe researchers. So far no drug has attained this advantage. Even the most effective drug that hit markets in the 1990s, 'Triptans' halt migraines only once they begin. Many drugs such as calcium channel blockers, anti-epileptics, anti-depressants have been tried to prevent the attack of migraine in susceptible people (there appears to be genetic characters that tag a person as vulnerable to migraine attacks). The global community of physicians and millions of sufferers are anxiously waiting for a wonder drug that is specific for migraine.

Two Amgen migraine drugs are currently undergoing clinical trials. New drugs, designated to a group called biologics, have been tested by injecting them into patients with chili oil spread on their skin. They were found to prevent the transmission of pain signals. A successful drug that wins Food and Drug Administration approval can bring more than $1 billion in sales in USA itself. Migraine is a very common cause of headache throughout the world.

Drugs Used in the Prevention of Migraine
Pharmacologic agents, complementary therapies as well as new therapies for prevention of menstrually associated migraines have been included in revised guidelines.
READ MORE

Migraine in Women-The Role of Hormones
How is migraine; the most commonly dreaded disorder affecting a huge number of women around the globe? Does it have anything to do with the menstrual cycle? Does hormone fluctuation affect it?
READ MORE

New Drug With Vitamin B and Folate May Aid Migraine Sufferers
A group of Australian researchers have come up with a new drug containing folate and vitamin B to treat migraine.
READ MORE

Migraine Triggers Identified
Spending hours hunching over a computer screen, not getting enough sleep could be blamed for migraines, say scientists.
READ MORE