An advertisement of a beauty clinic thus screams for attention.....

"For that perfectly contoured shape with silky smooth skin-

What is this cellulite? What is it due to and how does one get rid of it?

'Cellulite' or Gynoid Lipodystrophy, is a skin condition known by various other synonyms such as 'orange peel syndrome' and  'cottage cheese skin'. It is a condition that affects girls, women and some men wherein the skin overlying the thighs, abdomen and buttocks becomes dimpled, giving it a lumpy and somewhat unsightly appearance.

A whopping 80-90% of women are said to suffer from this condition. The condition can be seen in women depicted in 16th century Baroque painter Ruben's works of art. In fact, during those days, it was considered a sign of affluence and beauty. But today's 'Generation X' considers it aesthetically unacceptable. It generally occurs after puberty and childbirth in women.

The fair sex can take heart, because cellulite spares no one. Not even the bold and the beautiful, the supermodels and the prettiest women; all of them are at their wits end trying to get rid of their cellulite. Perhaps you have to thank your ancestors for it, as cellulite can be genetically inherited.

When the woman is affected, can the man be far behind? Not so - for some men, deficient in the male hormones, also suffer from cellulite. They include those who are castrated, or those suffering from a condition known as 'hypogonadism' (due to lack of male hormone called testosterone) or those being treated with the female hormone, estrogen, for prostatic cancer.

It is believed that the female hormone, estrogen, has a major role to play in initiating as well as worsening cellulite. Other hormones like insulin, catecholamines and prolactin can contribute to its formation

Cellulite is formed when fibrous bands develop connecting the skin to the muscles below. Derangement in the architecture of connective tissue, lack of a good blood circulation and abnormal water metabolism leads to fat, fluid and toxins getting entrapped between these bands of fibrous tissue. These bands then become tight and hard, compressing the fat and giving rise to the 'dimpling effect'.

Yes, cellulite can occur in thin women too. When obese women lose weight, cellulite will not disappear, although the dimples may reduce in depth.

With the passing of years, as the skin gets thinner, the cellulite becomes more obvious.

It could also be the price we pay for today's lifestyle-smoking, alcohol consumption, lack of exercise, prolonged standing or sitting, tight clothes, high heels, stress, excess starch and fats with too little fibre in the food have all been implicated in causing cellulite.

If you were to pinch the area of skin over the lower abdomen or thighs, and the skin is dimply and tender, or the area appears paler or feels colder than other areas in comparison then it is very likely that you have cellulite.

Medical experts divide it into grades1-4, where-

 Grade 1 is not detectable to the naked eye, but changes exist microscopically,

 Grade 4 is severe with lumps, dimples and even painful to touch.

It is the cosmetically 'unsightly appearance' that is the foremost complaint of a person having cellulite rather than any major physical suffering. There is really no limitation to one's activities apart from the preoccupation it causes in its hosts.

Cellulite and its treatment is the latest in the string of bugbears in a woman's attempt at sporting that svelte, toned and well- contoured shape. No one can escape it, but it can be kept under check. Read on......

Stress - Once again, stress is in the forefront of causes, and controlling the stress can work wonders in melting away the cellulite.

Drugs - derived from Indian chestnut, gingko biloba, xanthines have been tried with various success. Amongst those that can be applied over the area directly are aminophylline, caffeine and topical retinols. None of these have been proven to be curative.

ENDERMOLOGIE - is sometimes referred to as "liponic sculpturing". This is not a surgical procedure-Here a motorized device with two adjustable rollers and suction is used to massage the affected areas. It helps to improve the blood flow, aids in lymph drainage over the affected areas and also breaks down the fat cells in the area, thereby creating a smooth contour. It has a temporary effect and has to be combined with diet and other measures.

MESOTHERAPY- Here small amounts of medications and vitamins are injected into the middle layer of skin of the cellulite affected areas. The medicines help to dissolve the fat and the vitamins help in healing the affected areas, so that the affected areas become smooth and toned up. There may be initial redness and inflammation following the injections, but it would subside after a day or two.

RADIOFREQUENCY - stimulation, massage, Infra red light and applying Laser, to the affected areas has shown to be a magical combination in achieving smooth skin.

Phosphatidyl choline - is a fat solvent and it is often injected into the fat deposits to dissolve the fat. Liposuction, in some people, actually worsens it by producing an 'orange peel' appearance.

Exercise - Move it, shake it, sweat it out...exercise, climbing stairs, aerobics, are all purported to help particularly in addition to the sophisticated treatments, in reducing and keeping cellulite at bay.

Aroma Massages - Go exotic...Aroma massages using oils of sage, cypress; juniper has its own loyal followers. Ground coffee spread over the affected areas and wrapped in seaweed, kept on for half an hour, followed by washing it off and concluding the therapy with a massage is a quick and easy method one could follow in one's own home.

Improve Circulation - Pamper yourself with an exfoliating body brush while bathing, it can improve the circulation.

Diet - Last but not the least, watch what you eat. Cut down on those fats, sugar, salt, alcohol, endless coffees, and drink plenty of fluids and water. Herbs that are touted to detoxify the system include black pepper, garlic, and ginger.

The multiplicity of drugs and methods used to treat cellulite only go to show that the condition cannot be permanently eradicated. A combined approach of diet, exercise and physical therapy is required for best results.

Some procedures require many sittings and may have to be repeated at regular intervals. Patience and perseverance is the key.

Eliminating Cellulite
Cellulite is the collection of fat pockets that give the skin a dimpling, orange peel-like appearance. Cellulite occurs more frequently in women.
READ MORE 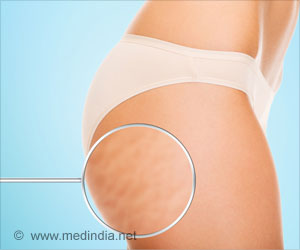