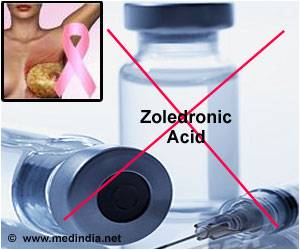 Breast cancer, one of the most common cancers affecting women the world over, can spread to different parts of the body. This process is referred to as metastasis. The cancerous cells can spread through the lymphatic system, blood or via tissues into the neighboring or distant organs, thus greatly affecting survival in these patients.

Tumor cells from breast cancer can spread to the bones resulting in bone resorption. This process releases a number of bone-derived growth factors that in turn promote survival and growth of cancer cells. Thus, preventing bone resorption using drugs from a group called bisphosphonates could help to prevent or delay the onset of metastasis, and thus improve survival in breast cancer patients. Some previous studies indicate that bisphosphonates reduce the chances of recurrence and death in patients with breast cancer.

Bisphosphonates are normally used for osteoporosis, a bone condition that often affects postmenopausal women. Osteoporosis results in thinning of bones, which makes them vulnerable to fractures. Thus, if bisphosphonates prove to be useful in breast cancer, they would provide additional benefit in preventing osteoporosis in these patients.


A study was carried out to evaluate the benefit of a bisphosphonate named zoledronic acid in the treatment of breast cancer. The results of this study were recently published in the New England Journal of Medicine. 3360 women suffering from stage II or early stage III breast cancer were included in the study. They all received standard adjuvant therapy which included radiotherapy and/or chemotherapy as well as other treatments like trastuzumab, according to the protocol of the institution in which they were being treated. In addition, one half of the patients received intravenous zoledronic acid on a periodic basis for a total duration of 5 years. Surgical treatment was intended after completion of adjuvant chemotherapy. Patients with distant metastasis or those unable to complete treatment of the primary cancer were excluded from the study.

The study deduced that zoledronic acid did not improve survival in these breast cancer patients. However, it may show some benefit in women who have undergone menopause at least 5 years before the start of treatment.

Thus, according to the researchers, the use of zoledronic acid to improve survival in breast cancer patients cannot be recommended. It may be useful to prevent bone loss due to cancer treatment in postmenopausal women. The exact effect of zoledronic acid on various reproductive hormones also needs to be established through further studies.