The link between consuming soy products and the risk of breast cancer has been laid to rest after a study published in the Journal Cancer which has shown that dietary soy products are beneficial and safe for women suffering from breast cancer. These foods that are considered to be one of the healthiest foods, were believed to increase the risk of breast cancer due to their estrogen-like properties. The greatest risk is associated with hormone receptor positive cancer, which is thought to thrive in the presence of elevated estrogen levels.
Dietary Soy Intake Lowers Breast Cancer Risk

Dr. Fang Fang Zhang from the Friedman School of Nutrition Science and Policy at Tufts University said that the isoflavones which are the components of soy with estrogen-like properties are associated with a reduction in the rate of growth of breast cancer cells under laboratory conditions. Dr. Zhang further stated that an epidemiological analysis of East Asian women with breast cancer showed that elevated intake of isoflavones was associated with reduced mortality. The major limitation is that the isoflavanols with the estrogen-like effects lowered the efficiency of the hormone therapy for breast cancer. This has led to the confusion about whether the intake of soy should be recommended or whether it should be restricted.


‘Regular inclusion of soy in the diet is necessary to lower risk for breast cancer and to prevent recurrence.’

The association between intake of dietary soy and death that occurs due to any cause was studied by Dr. Zhang and her colleagues. The study was conducted on 6235 Canadian and American women who were diagnosed with breast cancer, for a period of nine years. The findings of the study showed that
Dr. Zhang said that the studies showed that there was no detrimental effect that was identified among women with breast cancer who consumed a large amount of soy food.

The survival rate among women with hormone receptor-negative breast cancer was more than 20%, as it is a more aggressive form of cancer. Dr. Esther John from the Cancer Prevention Institute of California said that the results of the study showed that increased intake of isoflavones improved survival rates. The study involved the intake of dietary soy from foods and not from supplements.


Effect of Soy on Women's Health

Earlier studies have shown that soy foods are important for women's health.
Soy milk is found to contain the same amount of calcium but twice the antioxidant content found in cow's milk. Good sources of soy are tofu, edamame, soymilk and tempeh.

Soy Intake and Risk of Breast Cancer in Asian Americans

Dr. Anna M. Whu and colleagues from the Department of Preventive Medicine studied the risk of soy intake among adolescents and adults in Asian Americans. The scientists carried out a case control study to identify the role of traditional whole soy food of Asians on breast cancer risk.

The results of this study showed that there was a significant reduction in the risk for breast cancer among adolescents and adults who consumed whole soy food.

The study showed that:

Soy is a plant protein which is rich in fiber, magnesium, potassium and other vitamins. Dr. Clare McKindley who is a clinical dietitian working with MD Anderson's Cancer Prevention Center says that soy contains all the essential amino acids which are necessary to support the body's vital functions. People on a vegan or vegetarian diet, especially people with food allergies can include soy in their diet to get the optimum level of amino acids. A moderate amount of soy in the diet is 3 daily servings, one serving could be
The inclusion of soy in the diet is a healthy way to gain the required amino acids as well as to lower the risk for breast cancer. The current study aided in understanding the reduction in risk for breast cancer on the inclusion of soy in the diet and the effect on mortality rates. This information could be used to increase awareness about the benefits of consumption of whole soy.

Health Implications of Soy
Research shows that soy protein helps to reduce LDL cholesterol and prevent bone loss in postmenopausal women. Genistein, one of the phytochemicals found in soy, can reduce the risk of cancer.
READ MORE 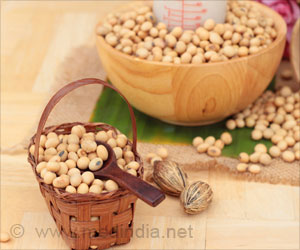 Soy Consumption Linked to Breast Cancer Treatment
Regular consumption of soy can prevent the recurrence of breast cancer. However, introduction of soy after breast cancer diagnosis can increase its risk.
READ MORE

Eating Soy Products May Not Reduce Menopause Symptoms
A recent study has proved that soy-based foods or fiber are unlikely to reduce menopause symptoms in women.
READ MORE