Breast Cancer Cells May Go Into Sleeper Mode After Treatment

Hormonal treatment of breast cancer destroys cancer cells but induces some tumor cells to enter into a sleeping or dormant state, that could awaken long after treatment is complete, resulting in cancer recurrence, according to research undertaken by scientists at Imperial College London.
Breast Cancer Cells May Go Into Sleeper Mode After Treatment

The findings of the study appear in the journal Nature Communications.

The research team undertook the study to gain more insight into this phenomenon and find possible answers on how and why some cancer cells entered a dormant state and became active later.


‘Approximately 30% of breast cancer patients who received hormone treatments have a recurrence of cancer. Hormonal treatment may destroy some cancer cells but induce other cells to enter a sleeping or dormant state. Further research is needed to tackle these sleeper cells, preventing cancer recurrence and potentially saving the lives of innumerable women with breast cancer.’
Read More..


Dr Luca Magnani, from Imperial's Department of Surgery and Cancer and lead author of this study, said: "For a long time scientists have debated whether hormone therapies - which are a very effective treatment and save millions of lives - work by killing breast cancer cells or whether the drugs flip them into a dormant 'sleeper' state. If we can unlock the secrets of these dormant cells, we may be able to find a way of preventing cancer coming back, either by holding the cells in permanent sleep mode, or be waking them up and killing them."

The findings of the study suggest that hormonal treatment does induce some cancer cells to become inactive only to awaken later leading to cancer recurrence that has spread to distant sites and also more difficult to treat.

In fact, previous research by the same team had analyzed how breast cancer cells become resistant to hormone treatment, and found that cancer cells make their own 'fuel' that prevents them from being starved of energy to grow by the cancer drugs. The findings of the current study could be another piece in the puzzle seeking answers to hormonal effects on breast cancer cells.

The exact mechanism by which the breast cancer cells switch off and enter a dormant mode and switch back on to an active mode is not clear, but the study team feel that unlocking the secrets of these dormant cells might help in preventing cancer recurrence, either by keeping the cells permanently in the sleep mode, or activating them and killing them.

In summary, hormonal treatment of breast cancer may induce some tumor cells to go into a "dormant sleeper" state, which may cause recurrence of breast cancer even after treatment, at a later date. Effective ways to tackle these dormant cells need to be found in order to save the lives of several women diagnosed with breast cancer.

Obesity Increases the Risk of Recurrence of Breast Cancer
Breast cancer is one of the commonest types of cancer seen in women. Hormone receptor-positive breast cancer accounts for two-thirds of all incidents of breast cancer worldwide.
READ MORE 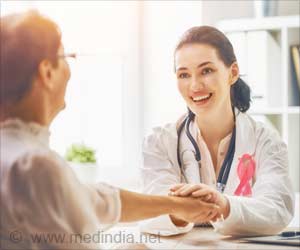 Web-based Calculator to Predict If Breast Cancer Will Recur
Should estrogen hormone therapy for five years following standard treatment for breast cancer be continued? Clinicians can now use the newly developed calculator to help find if you are at a high risk of breast cancer recurring.
READ MORE