Written by Anjali Aryamvally
Medically Reviewed by The Medindia Medical Review Team on October 6, 2017 at 6:35 PM 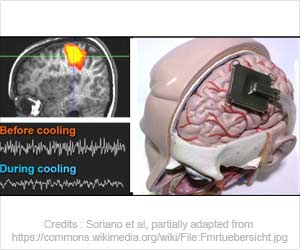 Around 50 million people worldwide deal with sudden and recurring seizures characteristic of epilepsy is caused due to abnormal brain activity and splurge of electrical signals that result in seizures.

Although there is medications and surgeries available to treat symptoms, the alternative approach of brain cooling may reduce frequency of seizures and may even prevent them. A recent study sheds light on the focal cooling mechanism using computer simulations. The findings are published in Computational Biology.

Ketogenic Diet May Reduce Frequency of Seizures in Severe Epilepsy
A high fat, low carbohydrate diet in patients with severe form of epilepsy seems to halt the condition and reduce the frequency of their seizures.
Advertisement
‘Cooling the focal area of the brain called focal cooling involves implanting a device in the area suppresses the hyperactive electrical signals in the brain’

Although focal cooling is not a novel idea of treatment, the approach has only been performed successfully in animal models like rodents Although medications are available to treat symptoms of epilepsy, there are up to 35% of patients that cannot effectively control seizures, even with such assistance. The only other alternative for them is surgery, to remove the epileptic focus area of the brain, which can be risky. Focal cooling if approved for clinical use could eliminate the need for surgery altogether.


Objective of the Study

The research team used data from laboratory and previous rat studies to first simulate a mechanism in which the focal cooling reduces activity at neural synapses, thereby reducing electrical signals. But this alone did not reproduce signal patterns observed in previous focal cooling experiments in rats. Following which a second mechanism in which cooling resulted in consistent signals but with lower strength was simulated. A combination of both mechanisms reproduced results from previous experiments.


"Focal brain cooling could be an alternative treatment for epileptic seizures with lower risk of irreversible functional loss compared to surgery," says study co-author Takatomi Kubo. "Our study attempts to start an initiative on thermal neuromodulation

International Epilepsy Day 2016 -'Epilepsy is More Than Seizures'
International Epilepsy Day is celebrated on February 8th to spread awareness and remove social stigma. 'Epilepsy is more than seizures' is the theme for this year.
Advertisement
of brain activity using a computational approach that can elucidate its mechanism and complement animal experiments and clinical tests."

Facts on Epilepsy
Epilepsy is a chronic brain disorder that is associated with repeated seizures. These epilepsy seizures are caused by abnormal brain cell activity