A new type of ingestible capsule has been designed that can be controlled wirelessly with Bluetooth technology. This novel capsule contains drugs and is fitted with a sensor, which after swallowing becomes lodged in the stomach. It device can release drugs or send signals about the surrounding environment of the stomach directly to a smartphone held by the user.

The capsule has been developed using 3D printing technology and can be used to treat a variety of diseases, particularly in cases where sustained drug release is required such as for chronic diseases. It can detect the presence of infections, allergic reactions, as well as other conditions and responds by automatically releasing the drugs.
Bluetooth Operated Ingestible Capsule Developed!


The technology has been developed by scientists at the Massachusetts Institute of Technology (MIT), the Charles Stark Draper Laboratory Inc., and Brigham and Women's Hospital, Massachusetts, USA.


‘A new type of wirelessly controlled ingestible capsule has been developed, which deploys an electronic device that anchors to the stomach wall. The device is fitted with sensors that can monitor the internal environment of the stomach. It is also capable of drug delivery and can be operated using a smartphone.’
Read More..


"Our system could provide closed-loop monitoring and treatment, whereby a signal can help guide the delivery of a drug or tuning the dose of a drug," says Dr. C. Giovanni Traverso, MB, BChir, PhD, who is an Assistant Professor of Medicine at Harvard Medical School, and a gastroenterologist at the Division of Gastroenterology, Brigham and Women's Hospital, Boston, MA, USA. He is also a Research Affiliate at the Department of Mechanical Engineering, MIT, Cambridge, MA, USA and is one of the senior authors of the paper.

The research team indicates that the newly developed device can be linked to other devices and sensors that may be attached to the body surface or implanted within the body. Then the collected information from all the devices could be combined together and sent to the patient's or doctor's smartphone, thereby providing a broader and complete picture of the patient's health status.

Dr. Robert S. Langer, BS, ScD, who is currently the David H. Koch Institute Professor at the Department of Chemical Engineering, MIT, Cambridge, MA, USA and also one of the senior authors of the paper, indicated that it was very exciting to be able to demonstrate how 3D printing technology helped to develop novel ingestible devices for use in patients, thereby facilitating the advancement of mobile health applications.

The study has been published in the journal Advanced Materials Technologies, a John Wiley & Sons publication. The study's lead author is Dr. Yong Lin Kong, MA, PhD, who is currently an Assistant Professor at the Department of Mechanical Engineering, University of Utah, Salt Lake City, Utah, USA. While carrying out the study, he was a Postdoctoral Associate at the Department of Chemical Engineering, Koch Institute for Integrative Cancer Research, MIT, Cambridge, MA, USA.

The present study is based on previous research that was carried out over a span of several years by the same research group led by Langer and Traverso. During that time, they had developed and tested several ingestible devices in the form of capsules that were fitted with sensors and could also be used for drug delivery purposes. These ingestible capsules were developed with the purpose of delivering drugs over long periods of time, thus, averting the need for frequent injections. These devices were designed to help maintain the strict drug regimens that are required for treating diseases like HIV/AIDS and malaria, amongst others.


What's New in the Current Study?

In the previous studies, the research team developed a device that had star-shaped arms that could retract to fit into the tiny capsule.

In the new study, they developed a device that opened-up into 'Y'-shaped arms. When swallowed, the capsule dissolves, exposing the device bearing the 'Y'-shaped arms that help to anchor the device to the stomach wall. The device can remain in the stomach for approximately one month, after which it disintegrates and is excreted through the gastrointestinal (GI) tract along with the feces.

In this new device, one of the arms is fitted with four tiny compartments, which can be loaded with various drugs. Since the drugs are formulated with a polymer, they can be released in a sustained manner over a span of several days. The researchers are optimistic that this drug-release process could, in the future, be controlled remotely by a wireless Bluetooth connection attached to the user's smartphone.

In addition to releasing drugs, the sensors in the device, "sample" the stomach contents and sends back information to the smartphone through wireless connectivity. Previously, the research team developed sensors that could record vital signs such as heart rate and breathing rate. The new sensors can detect the internal body temperature and relay signals to the user's smartphone held near the body.

"The limited connection range is a desirable security enhancement," Kong says. "The self-isolation of wireless signal strength within the user's physical space could shield the device from unwanted connections, providing a physical isolation for additional security and privacy protection."


How was the Electronic Device Fabricated?

The research team used 3D printing technology to fabricate the device. This enabled the assembly of the intricate and complex components of the device, which would otherwise have been very difficult indeed. This technology is capable of assembling alternate layers of flexible and stiff polymers to construct the outer surface of the capsule. This makes the capsule strong enough to resistant the harsh acidic environment of the stomach.

"Multimaterial 3D printing is a highly versatile manufacturing technology that can create unique multicomponent architectures and functional devices, which cannot be fabricated with conventional manufacturing techniques," Kong says. "We can potentially create customized ingestible electronics where the gastric residence period can be tailored based on a specific medical application, which could lead to personalized diagnostic and treatment that is widely accessible."


What is 3D Printing?

3D printing is a computer-controlled process in which materials are added, layer by layer, and then allowed to solidify to produce a three-dimensional (3D) structure. The computer technology involves computer-aided design (CAD), which utilizes digital model data for designing how the final product will look like. The printing instructions come from a digital file controlled by a computer.

Since, the 3D printing process involves adding successive layers of material to produce the final product, it is also called additive manufacturing. Each of these layers can be seen as a thin slice in horizontal cross-section of the finished product. The main advantage of 3D printing is that it enables the production of complex, functional shapes of any shape and geometry that uses less material than conventional manufacturing methods, thus making the process much more robust.


What are the Potential Applications of These Devices?

Since, these types of devices can be deployed inside the body; the sensors could help in the early diagnosis of diseases and the drug delivery mechanism could respond with timely delivery of medicines. For example, if infections are detected, these can be counteracted with antibiotics, while in case of allergies; quick detection can avert complications by promptly delivering antihistamines. In this regard, Traverso indicated that these types of electronic devices have great potential for serving as mobile platforms for patient care.

The research team plans to develop an advanced type of battery for these devices, which currently uses a tiny battery, powered by silver oxide. They are exploring other approaches such as using an externally-mounted antenna as a power source or using the hydrochloric acid in the stomach for generating power.

The newly developed temperature sensor has already been tested in pigs. The researchers are optimistic that within a couple of years, it will be possible to start testing these ingestible devices in humans.

The research was funded by the Bill & Melinda Gates Foundation (BMGF) and the National Institutes of Health (NIH) through the Draper Laboratory, Cambridge, Massachusetts, USA.

Stomach Acid Provides Long-Term Power for Ingestible Electronic Devices
Ingestible electronic devices were first described in the scientific literature in the 1950s and have been used more broadly in the past two decades.
READ MORE 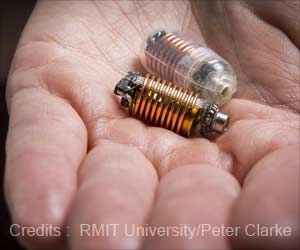 Electronic Capsules Developed to Sense Gases in the Gut
An electronic capsule has been developed that measures the hydrogen, oxygen and carbon dioxide levels in the gut, and changes associated with dietary alterations.
READ MORE 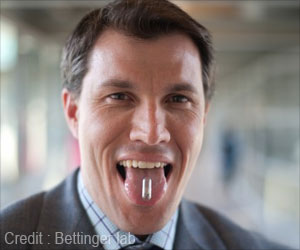 Devices With Edible Batteries Can Be Swallowed to Help With Diagnosis & Treatment
Edible non-toxic batteries that power ingestible drug delivery systems or bio-sensors may soon become a reality to help diagnose and treat disease.
READ MORE 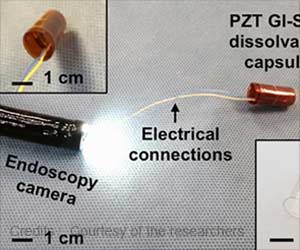