Assessment of Acute Malnutrition Among Children

Written by Sudha Bhat, M.Pharm, R.Ph (US)
Article Reviewed by The Medindia Medical Review Team on February 20, 2016 at 4:40 PM
Health In Focus

Good healthy nutrition is vital for every child's growth and development. However, it is estimated that globally about 55 million children under the age of 5 years suffer from severe acute malnutrition (SAM). Malnutrition is responsible for an alarming 35% of deaths among children under 5 years.


However, there are conflicting reports from several countries, which indicate that the MUAC- based and WHZ-based malnutrition diagnosis correlate poorly and that they identify different children. According to a report, India still lags behind some of its poorer neighbors on child nutrition with more than 40 million stunted children. Short maternal stature, extreme poverty, poor dietary diversity and mother's lack of education are among the risk factors for malnutrition in children in India.

A systematic review of the evidence was conducted so as to assess the validity of these observations and compare the degree of discrepancy between countries. The choice of the anthropometric indicator for monitoring nutritional rehabilitation and deciding discharge was also evaluated.

Different databases such as Medline, Cochrane Library, CRD database, Embase amongst others were searched and evaluated to check for any evidence of adverse events, treatment duration, costs and mortality when the SAM children were admitted to and discharged from hospital based on MUAC as stand-alone criteria compared to using WHZ.

It was noted that out of the eleven studies which were included, only one cohort study compared children with an MUAC < 115 mm and those with WHZ <-3 at the start of the rehabilitation period.

Four studies reportedly admitted SAM children based on only MUAC values. The mortality risk was relatively low in three studies and was reported to be £2.1%.

The remaining six studies admitted children based on a low WHZ, but reported MUAC gain during nutritional rehabilitation. The treatment provided and discharge criteria were also not found to be homogeneous across these studies.

One study reported a lower daily MUAC gain especially in younger and smaller children and in females. Two studies discharged children on the basis of MUAC (MUAC ≥124 mm only or MUAC ≥130 mm), but did not conduct any follow-up after discharge.

It was seen that none of the studies conducted any follow-up of children after discharge to check for any risk of relapse or longer-term mortality.

The findings of this evaluation suggest that MUAC could be used adequately as a stand-alone criterion for the diagnosis, monitoring and discharge of SAM children. However, a strong recommendation could not be made for the same due to lack of sufficient and conclusive evidence. In addition, factors such as age, sex and stunting should also be taken into consideration and see if they have any effect on the rehabilitation outcomes. 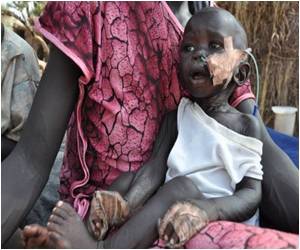 Indian Scientists Urged to Use Biotechnological Tools to Address Malnutrition
Dr. Harsh Vardhan, Union Minister for Science and Technology, says that biotechnological tools should be put increased use to address the problem of malnutrition.
READ MORE

Malnutrition is the Overriding Cause of Child Deaths
Nearly 3 million children die every year of malnutrition-accounting for nearly half of all child deaths under 5.
READ MORE

Nutrition Therapy may Not Lead to Long-Term Benefits for Malnourished Children
Researchers suggest that while nutrition therapy can save the lives of millions of malnourished infants, it may not be able to restore the imbalance.
READ MORE

Height and Weight-KidsMalnutrition to Obesity - The Big LeapMalnutritionKwashiorkor (Protein Malnutrition)