Aspirin Reduces Risk of Death Due to Prostate Cancer 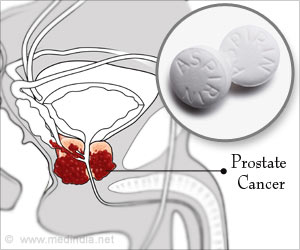 Aspirin is used extensively as a blood thinner to lower risk of heart attack. Interestingly a new study suggests that aspirin has another positive side effect- that of lowering risk of dying due to prostate cancer. In other words, prostate cancer progression to lethal state is lowered.

There was a 40% reduction in risk of death due to prostate cancer among patients who took aspirin, according to urologic Oncology Fellow and principal researcher Dr Christopher Allard. The results of the study were presented on January 4th 2016 at the American Society Of Clinical Oncology in San Francisco.


This observational study based its research findings by studying real life users of aspirin who also had prostate cancer. This study found that prostate cancer patients who use aspirin for cardiovascular benefits will now have added reasons to use it regularly.


‘Aspirin is used extensively as a blood thinner to lower risk of heart attack. New studies indicate that regular use of aspirin has additional benefit in prostate cancer patients, as it lowers the risk of developing lethal cancers in such patients. ’

Further, it was found that This study was an observational study and not a controlled trial. Therefore additional studies would have to be performed to corroborate the results of this study.

Dr Sumanta Pal, spokesperson for ASCO and an Oncologist found this study 'intriguing' but added a note of caution that patients should seek expert medical help before taking aspirin.

3. "Decreased sensitivity to aspirin is associated with altered polyamine metabolism in human prostate cancer cells" by Li J, Cameron GA, Wallace HM. Aspirin was found to inhibit the growth of cancer cells. Aspirin induced spermine N acetyltransferase in human cancer cells and these cells grew more slowly when compared with cancer cells that were not induced.

Can Aspirin be Prescribed for Prevention of Cancer?
Newer studies are being carried out to study the role of aspirin in cancer prevention and preventing cancer death.
READ MORE

An Aspirin A Day Increases Tumor Cell Death and Prevents Relapse of Cancer
During cancer treatment, initially the tumor shrinks but after a few years it bounces back making the tumor more aggressive.
READ MORE

Aspirin Helps Prevent Heart Attacks And Strokes, But Did You Know It Could Prevent Dementia or Even Cancer?
When it comes to preventing heart attacks and strokes, aspirin is very useful, but now researchers believe the humble aspirin could also hold the key to warding off dementia and cancer.
READ MORE