Written by Pooja Shete
Medically Reviewed by The Medindia Medical Review Team on December 19, 2020 at 6:35 PM
Health In Focus

Heart patients who have weekly nightmares are five times more likely to feel anxious or depressed. They are even more likely to have difficulty in sleeping when compared to those who do not have frequent nightmares.

The findings of this study are published in the European Journal of Cardiovascular Nursing.
Are Nightmares Sign of Mental Health Problems?

The research team has stated that health professionals should ask their patients if they experience any bad dreams as it is a warning sign for depression and anxiety or trouble sleeping.

Insomnia and physiological disorders like anxiety and depression, are linked with the development and progression of heart disease.

Previous studies conducted among the general population revealed that frequent nightmares are associated with psychological and Sleep Disorder. This was the first study to evaluate the relationship between nightmares and heart disease. Additionally,the research team examined whether the unpleasant dreams relate to heart medications.

The study included 1,233 patients with an average of 64 years and 25 percent were women admitted to Keio University Hospital with various heart diseases. By using self-reported questionnaires nightmares, sleep and physiological characteristics were assessed. By using overnight pulse oximetry that measures blood oxygen levels, sleep-disordered breathing (when breathing stops and starts during sleep) was measured.

Frequent nightmares were associated with insomnia, anxiety, and depression and not with heart medications and sleep-disordered breathing.

Dr Kohno said, "The prevalence of nightmares and frequent nightmares in the general population, reported by other groups, is similar to the experience of heart patients in our study. We showed that in people with heart disease, women are more likely than men to have persistent bad dreams- this also mirrors findings in the general public. The strong associations among frequent nightmares, insomnia, and psychological disorders we observed reflect prior research in healthy people, suggesting that these relationships could be universal regardless of the presence of heart diseases."

The research team has stated that nightmares can be a warning for an underlying psychological disease or sleep disorder and should be addressed to prevent new or worsening of heart problems. 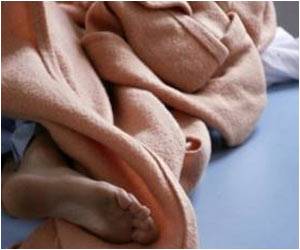 Weighted Blankets Can Decrease Insomnia Severity
Weighted blankets can be used as a safe and effective intervention in the treatment of insomnia patients who also have psychiatric disorders. They experienced improved sleep and reduced insomnia severity.
READ MORE