Anti-Obesity Day 2014: Pledge to Take Responsibility of Your Well Being 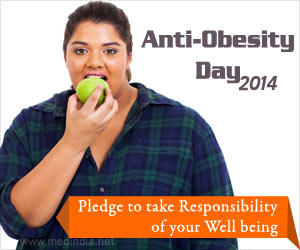 Considering the alarming number of obese individuals in the recent years, it's time we sit up and pledge to take responsibility of our well-being, eat healthy, stay fit and fight obesity this Anti-obesity Day which is observed on November 26 in India.

Overweight and obesity together form the fifth leading cause of deaths, says the World Health Organization (WHO), adding that obesity is causing approximately 2.8 million adult deaths annually in the world.

According to the Institute for Health Metrics and Evaluation (IHME) at the University of Washington, India is home to 41 million obese people. It secures third position for the highest number of overweight people in the world. The first two spots are taken by US and China.


Another study claims that in India, the problem of being overweight was found more among females, urban and high-socioeconomic-status (SES) groups. And this problem has spread like an epidemic in India.

The term obesity means having excess body fat, whereas being overweight which means weighing too much. On an average, a man needs about 2,500 calories a day to maintain a healthy weight, while a woman needs about 2,000 a day. The trick lies in maintaining a balance between the in-take of food and burning of calories. The moment we are not able to burn the excess calories consumed by our body, we get extra energy which gets accumulated in our body in the form of fat, causing obesity.

"To check obesity, we need to be physically active, eat healthy and give up sedentary lifestyle," says endocrinologist Dr. Sunil Mishra, consultant, Medanta Hospital in Gurgaon.

The WHO says in 2015, there will be about 2.3 billion overweight people over 15 years and over 700 million obese people in the world.

Earlier, the problem of obesity was seen mostly in developed countries, but now it's become a new challenge even in developing countries. In India, people are keen to relish the Western diet instead of the traditional food, thus losing out on the healthy part of the food.

In another revelation, over 23 percent women in urban areas are either overweight or obese, while the figure for this is only 7 percent in rural areas. The problem is prevalent more among the non-poor section than the poor in urban India.

A study claims that women in India are more overweight and obese than men. A remarkable point was noticed in case of women in India. For women, media forms an effective means of learning about new things and to get exposure. Thus, women who were more aware due to media exposure have two times more chance of being overweight or obese.

Media is a great tool to learn about healthy habits and lifestyle. But at the same time it also tells people about energy-saving gadgets, calorie-loaded or junk food items. Women tend to get influenced, thus very easily becoming victims of overweight or obesity.

Today's fast-paced life has transformed our lifestyle by leaps and bounds. We are living in a new world where most of the times we are leading a sedentary lifestyle. Long hours are spent in front of the computers in offices and whatever little time is left is used for entertainment before the television. People prefer to use cars even for short distances. Hardly do people have time for exercises and workouts.

The new ways of life are also gifting people with the problem of stress, which in turn plays an important role in promotion of obesity.

According to National Family Health Survey (NFHS), cases of overweight and obesity are very high in urban areas, more prevalent among the non-poor households.

The kind of food we consume has a direct impact on our being overweight and obese. People are gorging on high-calorie, processed and sugary foods without understanding its harmful effects on our body. People gradually get addicted to fatty foods which lead to obesity as they hardly work out to burn these calories. Today, it is the fast-food culture as people are always hard-pressed for time. Sweetened beverages are another culprit on the list of items that cause obesity.

Recently, Food Processing Minister Harsimrat Kaur Badal had urged food and beverages major PepsiCo to try to bring down sugar contents in its soft drinks. But obesity can be caused due to other reasons as well, such as genetic and other diseases such as hypothyroidism.

Obesity is a growing concern in India as it opens doors to many other diseases and complications. Diabetes tops the list of these problems.

As per figures released in 2009 by International Diabetes Federation, there are 285 million diabetics in the world and 50.8 million of these are in India.

According to a study conducted by Dr. Anoop Misra and his team of National Diabetes, Obesity and Cholesterol Foundation, Delhi has an estimated 29.8 lakh diabetics. Consumption of refined food and leading a sedentary lifestyle have led to the rise in type 2 diabetes in urban areas, according to Dr. Mishra.

Being obese places a person at a higher risk of cardiovascular diseases. Obese patients are more likely to have hypertension. Obesity increases the workload on heart and total blood volume, thus affecting the normal functioning of heart. These problems together create a fit case for heart failure, high blood pressure and other heart diseases.

Obesity also causes high cholesterol. Cholesterol is a waxy substance that gets deposited in the walls of the arteries of the heart that supply nutrients and oxygen to the heart. Due to lack of adequate oxygen and nutrients, a person can suffer from various heart problems.

Osteoarthritis, a common joint problem of the knees, hips, and lower back, can also be triggered by obesity. Too much weight can put pressure on the joints, causing pain and wearing away of tissues that protect joints.

Another common complaint due to obesity is sleep apnea, a sleep disorder due to breathing problems. An obese person gets fat deposited around the neck, making it difficult for him to breathe.

Obesity also brings about changes in women's reproductive system. It can cause menstrual disorders, infertility, miscarriage, and problems in conception. Even in-vitro fertilisation becomes a difficult task if the person is overweight or obese. Most of the times, when obese women get pregnant they end up with a C-sec for delivery. Dr. Manju Khemani, head, Gynaecology, Saket City Hospital, Delhi, says, "A woman should take care of her weight even during pregnancy as it can pose problem during delivery and even after it. Expectant mothers should gain not more than 10-12 kg during the entire 9-month duration. Obese or overweight moms-to-be have problems in normal delivery and at times they develop gestational diabetes."

Prevalence of Obesity in Children

Today, childhood obesity has become a chronic problem which is associated with other problems such as diabetes and hypertension. The reasons can range from lifestyle problems to food habits, lack of physical activity and genetics. Girls, today reach puberty at a much earlier age than before. Today, children are more inclined to playing video games, watching television, using mobiles and snacking away fast food such as burgers, French fries and soft drinks. All these compounded with lack of physical activity are only increasing their abdominal circumference. They are not getting the prescribed nutrition.

To get rid of obesity, one needs to bring about changes in the lifestyle. The problem of obesity cannot be conquered in a day. It is a continuous process. The two most important steps to start with are cutting down calorie intake and increasing physical activity. This initiative will yield about 10 percent loss of initial body weight. To continue with the effort, the person then needs to bring about changes in eating habits and make exercise a part of the life.

The person also needs to self monitor his lifestyle pattern. He should say no to empty calories and sugary food and include green vegetables and fruits in his diet. The person should stick to a balanced diet and should get aware about the nutritional aspect of food items, especially fried and processed foods. It is recommended to eat slowly as this will instill a feeling of fullness and thus restrict the craving for more food.

Parents need to educate their children on the ill effects of eating junk food and not including healthy food in the diet. Parents need to follow these steps themselves first so that children can learn from them and inculcate the habit of physical activity in children. Junk and sugary food can be consumed only in moderation as it is impossible to say no to such treats.

In case of morbid obesity, people also agree to go under the knife to get rid of that extra flab.

How obesity affects a person
The problem of excess weight can be effectively dealt with, by the practice of yoga, which helps to shed unnecessary fat and keep the body in shape and in good health.Yoga Obesity Pranayama
READ MORE