Aim of the Research

The research team combined genetic information from patients with AD, coupled with known incidence rates from the U.S. population, and evolved a means of instantly calculating the lifetime risk of developing AD at any given age.
Alzheimers Disease Risk Indicated by Novel Genetic Tool


"We combined genetic data from large, independent cohorts of patients with AD with epidemiological estimates to create the scoring, then replicated our findings on an independent sample and validated them with known biomarkers of Alzheimer's pathology," said co-first author Rahul S. Desikan, MD, PhD, clinical instructor in the UCSF Department of Radiology & Biomedical Imaging.


‘Single nucleotide polymorphisms (SNPs), a type of DNA sequence variation within a given population, predicts lifetime risk of Alzheimers disease and age of onset.’


Interestingly, and quite unsettlingly, even for those who are normal and don't suffer from dementia, this tool can accurately predict the risk and age of onset.

Says Desikan, "Even if you don't already have dementia, you can find out what is your yearly risk for AD onset, based on your age and genetic information. We think these measures of polygenetic risk, of involving multiple genes, will be very informative for early AD diagnosis, both in determining prognosis and as an enrichment strategy in clinical trials."

Details of the Research

These SNPs influence susceptibility to disease. The scientists looked specifically at the association between specific SNPs and Alzheimer's disease and for APOE status (presence of APOE E4 allele is linked to a greater risk of developing late onset AD).

The research group developed a continuous polygenic hazard (PHS) score based on the genetic analysis to predict age-specific risk of developing AD, then tested it in two separate cohorts or defined groups of people.

Findings of the Study References :

"From a clinical perspective, the polygenic hazard score provides a novel way not just to assess an individual's lifetime risk of developing AD, but also to predict the age of disease onset," said senior author Anders Dale, PhD, director of the Center for Translational Imaging and Precision Medicine and professor in neurosciences, radiology, psychiatry and cognitive science at UC San Diego School of Medicine. "Equally important, continuous polygenic testing of AD genetic risk can better inform prevention and therapeutic trials and be useful in determining which individuals are most likely to respond to therapy."

Possible Limitations of the Study

The authors noted that their study population consists of persons predominantly of European descent, and therefore the results do not indicate AD risk or incidence in other populations such as Afro-Americans or Latinos.

"This limitation is an unfortunate product of available genetic studies. To have good predictive performance, the genetic risk score requires a large amount of data to train, but currently only European cohorts have reached this critical mass," said co-first author Chun Chieh Fan, MD, in the Department of Cognitive Science at UC San Diego.

But "given the genome-wide association studies across ethnic populations that are emerging, the health disparities in the field of genetic prediction will be removed," Fan added. 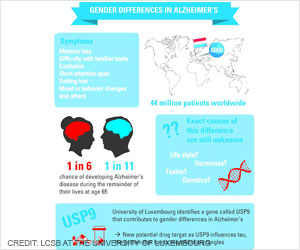 New Gene Could Be A Potential Target For Alzheimers Disease
Ubiquitin-specific peptidase 9 (USP9) gene found to be a potential target for the treatment of Alzheimer's Disease, reveals study.
READ MORE 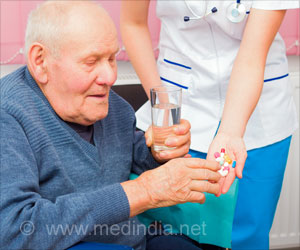