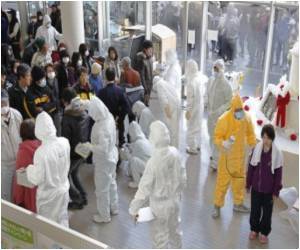 The health risks to public from Japan's nuclear accident is no worse after a change in the disaster's status on Tuesday, the World Health Organization said.

Hartl also stressed that there is no one left in the exclusion zone, and that measures taken "appears to be enough" for the moment.


Japan upgraded its month-old nuclear emergency to a maximum seven on an international scale of atomic crises Tuesday, placing it on a par with the Chernobyl disaster a quarter-century ago.

The reassessment to a "major accident" with "widespread health and environmental effects" was based on the total radiation released, which officials said was one-tenth of the 1986 accident in the then Soviet Union.

New recommendations from the American Thyroid Association on outpatient radioiodine treatment aim to minimize unintended radiation exposure and maximize the safety of patients.

Radioisotope Scan
News Archive
News Resource
Advertisement
News Category
Milestone In Voluntary Blood Donation Achieved Samsung Reinvents Toilet for the Poor Which is a Better Form of Exercise: Daily or Weekly? First Phase of Foot-and-Mouth Disease Vaccination Shocking News: Polio Cases Return After a Decade in the US
More News
Sign up for Wellness Consult a Doctor Sign up for Selfcare

Drug - Food Interactions Sanatogen Diaphragmatic Hernia Noscaphene (Noscapine) Find a Doctor Nutam (400mg) (Piracetam) Find a Hospital Post-Nasal Drip A-Z Drug Brands in India Accident and Trauma Care
This site uses cookies to deliver our services. By using our site, you acknowledge that you have read and understand our Cookie Policy, Privacy Policy, and our Terms of Use