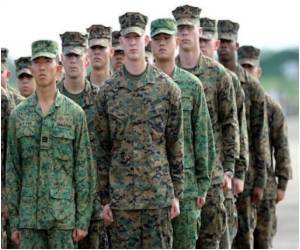 A research team led by Michigan State University has found that soldiers with a positive outlook in the most traumatic situations are less likely to suffer health problems such as anxiety and depression.

The study could have implications for police officers, firefighters and others who regularly deal with traumatic events such as death.

Training these first-responders to think in less catastrophic terms could help them better cope with distressing events and function more effectively in the long term, said MSU's John Schaubroeck, lead researcher on the project.


"There is evidence that if we can train people to be more psychologically resilient - that is, less catastrophic in their thinking and more optimistic and more hopeful - then they function better when they encounter traumatic situations," said Schaubroeck, John A. Hannah Distinguished Professor of psychology and management.

Adolescent depression is an ailment that occurs during the teenage characterized by persistent melancholy, disappointment and loss of self-esteem.
Advertisement
The study was based on a survey of 648 soldiers in nine combat units fighting in Iraq in 2004.

The information was collected in Iraq by Lt. Col. Everett Spain, an Army officer and then instructor and assistant professor at the United States Military Academy.

Many researchers have studied the psychological effects of combat after the fact, but this appears to be the first study to scientifically investigate resilience during wartime.

The study analyzed traits including hopefulness, optimism and ego resilience, which basically means how well a person maintains psychological well-being during difficult times.

According to the study, the more stressful the combat situation, the more important the resiliency traits became.

The study will be published in the January issue of the Journal of Occupational Health Psychology.

Depression is a common disorder and many worldwide suffer from depression. Early recognition of symptoms and signs of depression can help in taking a holistic approach to the management of depression.
Advertisement
<< Missing One Night of Sleep Akin to Walking Almost 2 Miles, ...
Physical Condition of Future Adolescents Improved by Mother... >>