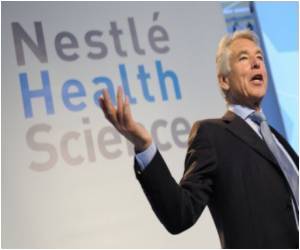 Nutrition that helps with ageing and heart problems has been taken up as an excellent business venture by Nestle with its introduction of health-focused subsidiaries.

Nestle Health Science and the Nestle Institute of Health Sciences would "pioneer a new industry between food and pharma," the Swiss food giant said in a statement.

The new company will incorporate Nestle's existing HealthCare Nutrition business, which had a turnover of 1.6 billion Swiss francs (1.2 billion euros/ 1.6 billion dollars) in 2009.


The group said it would invest hundreds of millions of Swiss francs over the next decade to build the biomedical health sciences research institute at the Swiss Federal Institute of Technology (EPFL) in Lausanne.

Encyclopedia section of medindia gives an introduction to some super foods that help in preventing and controlling cancer
Advertisement
"The combination of health economics, changing demographics and advances in health science show that our existing health care systems, which focus on treating sick people, are not sustainable and need redesigning," said Nestle chairman Peter Brabeck-Letmathe.

The multinational is aiming to use the new outfits to develop "personalised health science nutrition to prevent and treat health conditions such as diabetes, obesity, cardiovascular disease and Alzheimer?s disease, which are placing an unsustainable burden on the world?s health care systems."

Health claims on food labels or advertising are regulated in several countries such as the United States and in Europe to avoid misleading information.

Brabeck said Nestle was aiming for a leading role in health nutrition, while maintaining "the necessary focus on Nestlé's extremely important food, beverages and nutrition business."

The health institute will be integrated into the group's research and development network and run by the former chief scientific officer of US biotech company ViaCyte, Emmanuel Baetge.

Follow these dos and donts in your Ayurvedic diet to maintain a balance of vata, pitta and kapha doshas and ...

Asparagus is a vegetable packed with nutrients and vitamins that are essential for our body. Asparagus has ...