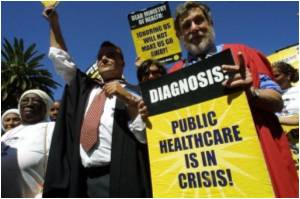 South Africa's Health Minister Aaron Motsoaledi has said that the country ranks the worst in terms of performance on the health index, as compared to the other BRICS nations.

: It is believed that the air pollution stats provided by the Ontario health department is filtered.
Advertisement

The average South African was expected to live until 54, while the Chinese could live to the age of 74, Brazilians to 73, Russians 68, and Indians 65.


Infant mortality in South Africa stood at 43 deaths per 1,000 live births, and 62 children out of every 1,000 would not make it to their fifth birthday.

Nozizwe Madlala-Routledge, South Africa's former deputy health minister alleges she has been sacked for doing her job.
Advertisement
According to Motsoaledi, on average, 410 South African mothers out of 1,00000 died during pregnancy or childbirth. He added that 521 out of every 1,000 South African men aged 15 to 59 die before turning 60.

Many of South Africa's dire mortality statistics could be attributed to communicable diseases, especially HIV and tuberculosis, he said.

South Africa, however, fared fairly well in curbing smoking. In Russia, 70.1 percent of men over the age of 15 were smokers. Brazil had the best figures, with only 19.4 percent of men smoking.

Most of the health indicator figures quoted by Motsoaledi were the most recent available and were for 2010.

Health Insurance - India
News Archive
News Resource
Advertisement
News Category
Beauty Regime for All Skin Types Tale of Love Hormones Shaping our Responses to Society How to Reduce Needle Anxiety in Children? Tobacco Addiction: Here's How to Break the Habit Parents are 'Winging It' on Their Kids' Mobile Use
More News
Sign up for Wellness Consult a Doctor Sign up for Selfcare

Hearing Loss Calculator The Essence of Yoga Sanatogen Post-Nasal Drip Turmeric Powder - Health Benefits, Uses & Side Effects Find a Doctor Iron Intake Calculator A-Z Drug Brands in India Color Blindness Calculator Loram (2 mg) (Lorazepam)
This site uses cookies to deliver our services. By using our site, you acknowledge that you have read and understand our Cookie Policy, Privacy Policy, and our Terms of Use