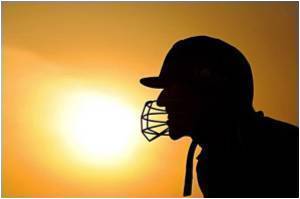 Another cricketer Rahul Ghosh was hospitalized on Tuesday after he sustained an injury while fielding during a local league game. This comes just a day after the former Bengal Under-19 captain Ankit Keshri died due to an on-field injury.

The incident happened during a match between Police AC and Vijay Sports Club  both second division teams in the Cricket Association of Bengal (CAB) league.

Fielding at cover region, Ghosh was hit below his ear after he took his eyes off to an awkward bounce during the 2nd division League match at the Videocon School of Cricket ground run by former India captain Sourav Ganguly in Salt Lake this morning.


"He has an injury in the left side of the head. There was bleeding. CT scan has been done. It shows a clot. He is now stable but has to be kept under observation for seven to eight days. Before that nothing conclusive can be said," the attending doctor said.
Advertisement
An atmosphere of gloom pervaded the hospital entrance on Tuesday as Ghosh's panicky parents - father Amitava and mother Sharmila - and other family members waited agonisingly for more updates. A number of CAB officials, including joint secretary Subir Ganguly and treasurer Biswarup Dey, visited the hospital.

Source: IANS
Advertisement
<< People Who Take Too Many Dietary Supplements may be at a Hig...
Color of Light Has a Major Impact on How the Body Clock Meas... >>

World's Highest Game of Cricket to be Played on 'Roof of Africa'
The snow-capped peak of Africa's highest mountain Kilimanjaro beckons the most ardent of tourists .....