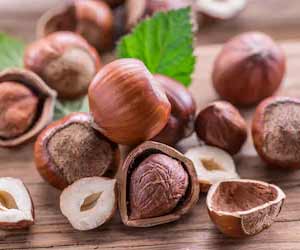 Eating hazelnuts provide your body with long-term health benefits. The nuts significantly improved the levels of two critical micro nutrients in older adults who ate them for 16 weeks. Increased concentration of magnesium in blood and high urinary content of alpha-tocopherol or vitamin E observed in the individuals after the supplementation period.

Older adults are at increased risk of various chronic diseases where inadequate levels of vitamins and minerals may play a significant role, including cardiovascular disease, Alzheimer's disease, liver disease and cancer. Tree nuts, including hazelnuts, contain a wide variety of vitamins and minerals, and are an excellent source of vitamin E and good source of magnesium, two "shortfall nutrients" that are lacking in the typical American diet.


‘Serving size of nuts is a key deciding factor. Individuals who ate hazelnuts everyday in a week had twice the amount of benefits than those who ate once in a week.’


Researchers stated the objective of the study was to determine whether daily hazelnut consumption by healthy older adults for 16 weeks improves biomarkers of micro nutrient status, especially vitamin E and magnesium. Participants consumed hazelnuts (57 g/d) for 16 weeks. Blood and urine samples and anthropomorphic measures were taken at the start and end of the intervention to determine plasma concentrations of £\-tocopherol and serum concentrations of magnesium, lipids, glucose, insulin, and high-sensitivity C-reactive protein along with urinary vitamin E metabolites; several other micro nutrients were measured by a lymphocyte proliferation assay. There were 3 primary endpoints, calculated as the mean changes in measurements between baseline and the end of the 16 week intervention for 1) plasma £\-tocopherol, 2) urinary £\-carboxyethyl hydroxychromanol (£\-CEHC; an £\-tocopherol metabolite), and 3) serum magnesium.

A one-ounce serving (28.35 g) of raw hazelnuts contains 27 percent (4 mg) of your daily value (15 mg) of vitamin E. Vitamin E is a shortfall micro nutrient, as identified by the Dietary Guidelines for Americans 2015-2020, which frequently is consumed at levels less than the Estimated Average Requirement of 15 mg/day.

These new findings complement existing knowledge about the role of nuts in heart health. In 2003, the U.S. Food and Drug Administration approved a qualified health claim related to nuts that states: "Scientific evidence suggests but does not prove that eating 1.5 ounces per day of most nuts, such as hazelnuts, as part of a diet low in saturated fat and cholesterol may reduce the risk of heart disease." U.S Dietary Guidelines recommend that the majority of your fat intake be unsaturated. One serving of raw hazelnuts (28.35 grams, or about 21 hazelnuts) has 6 grams of monounsaturated fat and only 1 gram of saturated fat.

This discovery also builds upon a growing body of scientific evidence on the benefits of nuts for older adults (average age 63 + 6 years). In 2013, observational researchers at Harvard University looked at how eating nuts may help reduce the risk of mortality, finding that those who ate nuts daily, such as hazelnuts, saw health benefits nearly double. The benefits were seen in both men and women, independent of other predictors for mortality. The results, published in the New England Journal of Medicine , are based on approximately three decades of follow-up among 76,464 women in the Nurses' Health Study (1980-2010) and 42,498 men in the Health Professionals Follow-up Study (1986-2010), including examination of food questionnaire data.

Compared to people who didn't eat nuts, people who ate nuts saw benefits that increased along with the number of servings of nuts they ate. Those who ate nuts seven times a week had nearly twice the benefit compared to those who ate nuts once a week; once a week nut eaters had a small, but still significant benefit. This observational study is an important addition to the body of research on nuts and heart health; however, given its observational nature, it's not possible to conclude cause and effect between nut consumption and mortality.

Hazelnuts 365: A tasty way to get your daily dose of nuts

Oregon hazelnuts are a delicious way to get seven servings of nuts per week. Because they are so versatile, these crunchy Pacific Northwest gems upgrade the flavor and nutrition of salads, entrees, desserts and snacks. A one-ounce serving of hazelnuts equals approximately 21 nuts.

A 2017 consumer survey, funded by the Oregon Hazelnut Marketing Board, found that 47 percent of people found hazelnuts to be "very healthy," which was nearly twice the number from the previous year. The survey also found people don't view hazelnuts as being as expensive as some other nuts. Food manufacturers have taken note and hazelnuts are gradually starting to appear in more commercially available products, according to the survey, growing from 63 products in 2013 to 93 in 2015, when data was last available.

Oregon boasts an ideal climate for producing the world's highest quality hazelnuts and it's in this special corner of the world where temperate ocean, mountain and river climates meet with rich volcanic soils to create prime hazelnut-growing country. Ninety-nine percent of U.S. hazelnuts are grown in Oregon across 72,000 acres. The 2018 harvest has officially come to an end, and early reports indicate a yield of 46,000 to 48,000 tons, an increase of 44-50 percent over last year's 32,000 tons.

"This harvest season was a great success thanks to perfect weather conditions, new acreage, dedicated farmers and the hazelnut industry work force," said Meredith Nagely, manager of the Oregon Hazelnut Marketing Board. "Consumers can expect to see an increase in hazelnuts available at retailers and on menus."

Health Benefits of Hazelnuts
Hazelnuts or filberts grow on hazel trees and shrubs, are loaded with nutrients. Hazelnuts improve brain, heart, and skin health. Read on to know about hazelnuts, including the nutrition facts, health benefits, recipes and more.
READ MORE