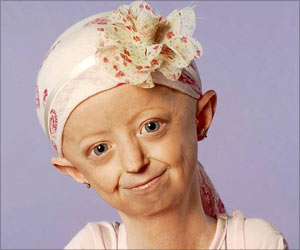 Hayley Okines, who raised awareness of a rare genetic disorder, progeria, which causes premature aging, has died aged 17. On April 2, it was announced that 17-year-old progeria sufferer Hayley Okines from Bexhill in East Sussex, England, had passed away.


Kerry Okines, Hayley's mother, posted the sad news on Facebook, "My baby girl has gone somewhere better. She took her last breath in my arms at 9.39 pm."

"Hayley was being treated for pneumonia, but she returned home shortly before she died. She came home for an hour and she saw her puppies, little brother Louie and sister Ruby. I think she wanted to come home to say goodbye to everybody. I think she knew that yesterday was going to be the time, " said, Hayley's father, Mark Okines.


Progeria left Hayley with a 104-year-old's body. She had been informed that she would not live past the age of 13. In 2007, she began undergoing pioneering treatment at Boston Children's Hospital, MA, as part of the first clinical trial for the condition.
Advertisement
In September 2012, the trial was a success, revealing how a farnesyltransferase inhibitor (FTI) improved the weight, bone structure and cardiovascular health of children with progeria.

Ever since 13 years, Hayley wrote an autobiography called "Old Before My Time", along with a documentary series.

The Progeria Research Foundation praised the teenager for her contribution to progeria research, "The entire PRF community mourns the loss of one of our shining stars, Hayley Okines. Hayley was one of the first participants in the ongoing progeria clinical trials. Hayley was a pioneer, and one of the reasons that we now have the first treatment for progeria. Today we remember her tremendous courage and determination."

Progeria, also called as Hutchinson-Gilford progeria syndrome, is caused by an abnormal protein in the LMNA gene, called progerin, which interferes with the production of lamin A, a protein that stabilizes a cell's nucleus. This disruption causes children with progeria to age up to eight times faster than normal.

Children with progeria rarely live past the age of 14, often passing away from ailments that affect the elderly, such as heart disease and stroke.

Progeria Patients may Have New Hope for Treatment
Children affected by progeria, which is a rare disorder characterized by premature ageing, die in .....

Promising Treatment for Progeria on the Anvil
A new study has brought the possibility of a treatment for progeria closer to reality....

Rapamycin Might Slow Progress of Progeria
Researchers have managed to slow down the progress of the disease using a drug known as rapamycin....

Progeria
Paa is a film in which Amitabh Bachchan, in a rare role reversal, plays son to Abhishek Bachchan, ...

Smoking and its Effect on Skin
Cigarette smoking is hazardous not only to health but also for skin and beauty. It causes premature ...