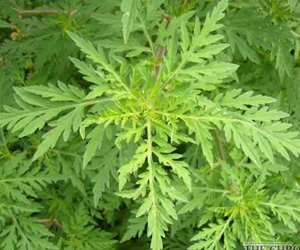 Hay fever is likely to spread in Europe in coming decades as a notorious allergy-causing North American weed goes on a rampage. Introduced to Europe in the late 19th century, common ragweed (Ambrosia artemisiifolia) is a plant with reddish stalks whose tassel flowers are massive producers of pollen.

Today, the plant is firmly established in northern Italy and southeastern France, and is spreading elsewhere in niche habitats such as farmland, roadside verges and railway embankments. On present trends, northern continental Europe and southern Britain will be badly exposed to the invader, according to the new research.

Hay fever is increasingly common and it is important that you understand the condition. Find out what is hay fever and how to treat it with medication and lifestyle changes.
Advertisement


"Climate change and ragweed seed dispersal in current and future suitable areas will increase airborne pollen concentrations, which may consequently heighten the incidence and prevalence of ragweed allergy," the paper said.

The plants around you that give you sniffles in your nose at specific time of the year are the source of allergy causing pollens.
Advertisement
By 2050, airborne concentration of ragweed pollen will on average be four times greater than current levels, the scientists found.

Northern-central Europe, northern France and southern Britain, where pollen loads from ragweed are negligible at the moment, will see substantial increases, and concentrations will increase in many areas that are already ragweed-affected.

About a third of the pollen increase will occur because of the weed's highly effective seed dispersal.

The remaining two-thirds will come from higher levels of carbon dioxide, which encourages vegetation growth, and changes to land use that will open up ragweed habitat in northern and eastern Europe.

The study, led by Lynda Hamaoui-Laguel of France's Laboratory for Climate and Environmental Science, appears in the journal Nature Climate Change.

This could possibly be the longest hay fever season in more than two decades, and certainly not very good news for nearly 15 million
Advertisement

According to data, people with both hay fever and asthma - but not people with only one of these two conditions - experienced an approximately 17 percent lower risk for dying from colorectal cancer.
Advertisement

Sick Building Syndrome is a condition that presents with a set of symptoms (like fatigue, nausea, headache, ...

Being allergic to plant pollens during the spring season characterized by symptoms such as sneezing, ...