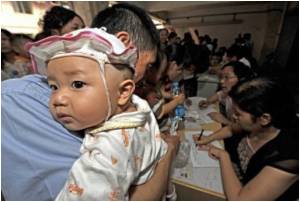 The Chongqing Family Planning Commission has announced a new regulation in China by which married people having babies outside marriage will be treated as serious offenders.

People giving birth out of wedlock will face a possible fine of up to 250,000 Yuan (36,725 dollars), the China Daily quoted a report in Chongqing Economic Times, as saying.

In China, Women's Toilets Will Now Have Urinals for Their Baby Boys!

The Chinese government has certainly made life easy for women by installing urinals in ladies toilets so that their toddler boys could use them.
Advertisement

The social compensation fee, which is the lowest level of the fine for this wrongdoing, is six times the city's disposable personal income of the previous year, while the highest is nine times that of the earlier year.


For example, if a couple gave birth in 2009 outside marriage, each of them would be required to pay 86,160 Yuan (the 2008 disposable personal income of the city was 14,360 Yuan) if their disposable income was lower than the previous year, 129,240 Yuan each if it was higher, the paper reports.

An unmarried couple having a baby would be charged 6,000 Yuan (882 dollars) in social compensation fees.

The price for extra births of married couples would be two to six times the disposable personal income of the preceding year.

Authorities in eastern China covered up an outbreak of cholera for 12 days out of fears that publicising the often fatal disease would shock the local population, state press said Sunday.
Advertisement

Daily calisthenics routine has been revived in Beijing, and Liu Tao is only one of the many workers who are expected by authorities to take part.
Advertisement