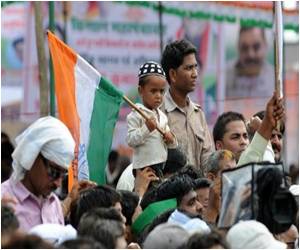 Despite a reminder from the National Human Rights Commission (NHRC), the Haryana government has failed to provide monetary relief to 288 students who took ill in May last after the midday meal in two government schools.

"The National Human Rights Commission had recommended that Haryana pay Rs.25,000 to each of the students who fell sick after the midday meal. It also suggested action against errant health officials. However, the state is yet to send its action taken report," said an official of the commission Thursday.

The food was being provided by the International Society for Krishna Consciousness (ISKCON) in Kurukshetra district. Students from two schools fell sick after eating the meal.


While 50 students fell ill after the meal on May 14 in Thanesar block, 238 students took ill on May 16 in Pehowa block.

According to the government's record, of the ten food samples taken, two were found contaminated with dead lizards. In two other samples, dead houseflies were found.
Advertisement
When the government received the notice from the NHRC for not providing relief to the victims, it claimed that all victims were provided the best treatment free of cost. Therefore, the case of interim relief under Section 18(a)(i) of Protection of Human Rights Act, 1993, the government claimed, could not be made in the matter.

Unsatisfied with the response, the commission asked Haryana to submit a compliance report by June 4, 2012.

On getting no response, the commission issued a reminder Aug 6 to the chief secretary of Haryana, seeking a compliance report within four weeks. No response has yet been made to the reminder.