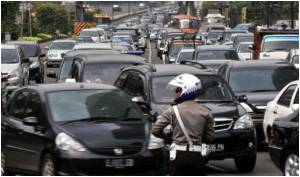 With traffic jams becoming a major problem in China, drivers who get stuck in traffic can now get on their mobile phones and call for a substitute to take their cars to their destinations, while the frustrated drivers are whisked away on the back of a motorcycle.

Throughout China, congestion is becoming a major problem, not only in mega-cities such as Beijing and Shanghai but smaller ones and even some county seats in coastal provinces.

Researchers at the Massachusetts Institute of Technology (MIT) have devised a model that can predict traffic jams.
Advertisement

"One important source of our customers is female drivers, some of whom feel physically uncomfortable if they wait in cars in traffic for too long," said Huang Xizhong, manager of a company that offers the service in Wuhan.


"Other customers are those with urgent dates or business meetings to go to, and those who have flights to catch and can't afford to wait in a traffic jam for too long," the China Daily quoted Huang, as saying.

Two Hours in Traffic Jams can Cause "heart Jams"

Inhalation of ultrafine particulate found in fossil-fuel combustion can change heart rhythm, by spending even two hours in traffic, increase the risk of serious cardiac events,
Advertisement
Huang said he started offering the service last year after receiving a number of calls from people who were stuck in traffic.

The service has also hit the streets in Jinan, capital of East China's Shandong province. There, drivers can be bailed out of a back-up for upwards of 400 yuan (60 dollars).

According to a global survey conducted by IBM last year, Beijing is tied with Mexico City as having the world's worst commute.

Some 84 percent of respondents said they spent an hour on the road each day on average in each direction.

Being in heavy traffic triples your risk of heart attack within one hour, warn researchers.
Advertisement
<< Celeb Tweets Iinfluenced 2010's Biggest News Stories Than t...
Your Twitter Account Can Give Away Your Accent >>

Software That can Turn Cellphones into Traffic Trackers Developed!

Nutam (400mg) (Piracetam) Pregnancy Confirmation Calculator Turmeric Powder - Health Benefits, Uses & Side Effects Loram (2 mg) (Lorazepam) Find a Doctor The Essence of Yoga Post-Nasal Drip Vent Forte (Theophylline) Hearing Loss Calculator Noscaphene (Noscapine)
This site uses cookies to deliver our services. By using our site, you acknowledge that you have read and understand our Cookie Policy, Privacy Policy, and our Terms of Use