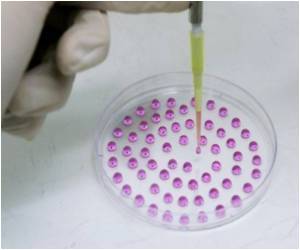 Israeli researchers say they have found a way of harnessing the body's natural healing process to improve anti-inflammatory treatment.

New drugs making use of the now discovered healing process can prove far more potent than the existing ones which attempt to curb inflammation by artificial means, explains Dr. Amiram Ariel of the Department of Biology at the University of Haifa, who headed the study. The research and its results have been published in the scientific journal European Journal of Immunology.

When the body manages to cope with the bacterial invaders, there is also the danger of "excessive" healing that will result in fibrosis and scar formation. This happens when the system reels out of control and "over-heals" the previously infected area. Fibrosis can lead to malfunctioning of the healing tissue, tissue death and sometimes even mortality. To understand why this happens, it is important to identify and understand the way macrophages' govern the healing process.


Bacterial inflammation forms in the body when bacteria (pathogens) penetrate body tissue. In response, specific types of white blood cells (neutrophils) begin to fight the invaders, to destroy and remove them from the tissue. In normal conditions, inflammation is terminated once the cells have managed to eradicate the bacteria and then undergo programmed cell death. At that point, another type of white blood cells come on stage  macrophages  whose job it is to take up the dead cells (the neutrophils) and to restore the tissue to its normal functioning state. While the macrophages feast on their cell meal, they gain the ability to begin the tissue's rehabilitation process. However, at one point they abandon the tissue and make their way over to immune system organs, via the lymphatic system, where they deliver the "back to routine" message to the rest of the immune system. This message is important for the body's return to normal functioning. Until now, however, the when and how that directs macrophages' leaving the inflamed tissue remained unknown.
Advertisement
The current study, conducted by Dr. Ariel alongside a team of students led by Dr. Sagie Schif-Zuck, set out to probe the critical stage of the healing process, when the macrophages decide to relocate and adjust their healing activities, moving from local rehabilitation of the damaged tissue to shut down of systemic immune responses at organs of the immune system.

The researchers discovered that the macrophages have a fascinating "uptake threshold" of seven cells. After engulfing seven neutrophils they are "licensed" to leave the tissue and continue with their remote tasks. The research also found that these cells are sensitive to the tissue's healing pace, so that when the tissue is healing quicker, they are permitted to leave earlier, and when the tissue is finding it harder to repair itself, they hang around longer, even after reaching the uptake threshold of seven cells. The researchers also discovered substances that "inform" the cells on the tissue's rate of repair, and found that by injecting these substances, the macrophages' transition to immune organs is accelerated while new macrophages are recruited to further treat the damaged tissue and continue the healing process. In addition, the study revealed that as they leave the tissue, the macrophages undergo molecular changes necessary to carry out their new functions in the lymphatic system.

"Our new study has found a major event in the inflammatory healing process that is responsible for the transition of macrophages from local rehabilitation of the damaged tissue to its consequent role in promoting the immune system's return to routine. The findings from our study can assist in the development of biological drugs that are based on the body's natural processes and biomolecules. Today, most drugs are designed to block particular pathways in the inflammatory process, which is also a "fight back" strategy found in bacteria and viruses; but in many cases, the body relates to such a drug as a type of 'bacterial invasion', finds ways to circumvent it and produces an alternative immunological response to the blocked one. By harnessing the natural healing process that we have discovered, the body will be able to naturally complete and terminate all the inflammatory processes, and will be able to avoid the deficiencies of existing anti-inflammatory treatments," Dr. Ariel concludes.

The Essence of Yoga Noscaphene (Noscapine) Turmeric Powder - Health Benefits, Uses & Side Effects Drug - Food Interactions Accident and Trauma Care Blood - Sugar Chart Sinopril (2mg) (Lacidipine) A-Z Drug Brands in India Loram (2 mg) (Lorazepam) Calculate Ideal Weight for Infants
This site uses cookies to deliver our services. By using our site, you acknowledge that you have read and understand our Cookie Policy, Privacy Policy, and our Terms of Use