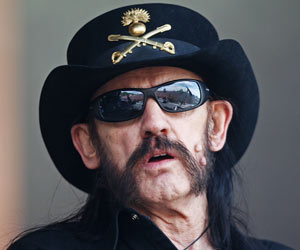 Ian 'Lemmy' Kilmister, frontman and founder of British heavy metal band Motörhead, died at the age of 70 two days after learning he had cancer.

The band said that Kilmister was diagnosed with cancer two days after his birthday and passed away at his home in Los Angeles.

Cancer Deaths to be Eliminated by 2050, Except for Over-80s

Cancer deaths will be eliminated for all except for the people over 80 years of age by 2050, reveals a new study.
Advertisement
‘Lemmy Kilmister, died at age 70, shortly after being diagnosed with aggressive cancer, the band announced on their official Facebook page.’

Ozzy Osbourne tweeted: "Lost one of my best friends, Lemmy, today. He will be sadly missed. He was a warrior and a legend. I will see you on the other side."

Older people who have memory and thinking problems, but do not yet have dementia may have a lower risk of dying from cancer than people who have no memory and thinking problems.
Advertisement
The Facebook post read: 'There is no easy way to say this...our mighty, noble friend Lemmy passed away today after a short battle with an extremely aggressive cancer.

'He had learnt of the disease on December 26th, and was at home, sitting in front of his favorite video game from The Rainbow, which had recently made its way down the street, with his family."

"We cannot begin to express our shock and sadness, there aren't words. We will say more in the coming days, but for now, please...play Motörhead loud, play Hawkwind loud, play Lemmy's music LOUD. Have a drink or few."

Tributes have been coming in for Kilmister from well-known artists within the rock and metal community following his death on December 28.

Sharon Osbourne tweeted: "My dear friend, Lemmy, passed away today. I've known him for 38 years. He will be so missed, but he will never be forgotten."

Queen guitarist Brian May said: "Sitting here, Re-Tweeting, distracted, and wondering what I can say about our utterly unique friend Lemmy's passing."

The rate of children dying from cancer has dropped by 24% in the last decade, says a new report by Cancer Research UK.
Advertisement
<< Low-Sodium Diet May Be Harmful For Heart Failure Patients
Ultrasound May Be Used As a Supplemental Test To Detect Brea... >>

Women who had been prescribed aspirin regularly before being diagnosed with breast cancer are less likely to have cancer that spread to the lymph-nodes than women who were not on prescription aspirin, discover researchers.