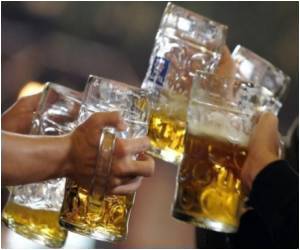 Happy hours of drinking in pubs are linked to pub violence, revealed in a study.

The findings from Cardiff University also show that pub staff themselves need to do more to stop heavily intoxicated customers from continuing to drink.

The team studied pubs and nightclubs with a history of violence across five different cities and towns in the UK. Customers entering and leaving the premises were breathalysed.


The team also recorded data about the price of beer and any drink promotions at each establishment. Their findings were then linked to police and hospital data about assaults inside or immediately outside the premises.

Alcohol consumption for recreation and relaxation has become a universal culture. But do you think you know enough about this drink - Take this quiz and find out.
Advertisement
The team found that premises with the highest levels of violence were most likely to have:

The team also found that simple observation of customers staggering or slurring their speech was a very accurate predicator of the levels of intoxication recorded by the breathalysers.

Dr Simon Moore, of Cardiff University's award-winning Violence and Society Research Group, who led the study, said: "Our findings clearly show that alcohol misuse and violence are not simply caused by drinkers' weaknesses. The way premises are run also contributes, suggesting the industry still has more to do in playing its part.

"The legislation requiring bar staff not to serve those who are already drunk should be properly enforced. Our study shows these customers are not difficult to spot - time should be called on those who can no longer walk in a straight line or who slur their speech.

"Measures to restrict promotions and enforce sensible drinking would make night-time city centres healthier and more enjoyable spaces for everyone who uses them."

The findings have been published in the journal Alcohol and Alcoholism.

Calorie Count Information may be Made Mandatory at Restaurants and Pubs

Restaurants and pubs may be forced to divulge information on calorie counts in their dishes.
Advertisement
<< Social Networking Use by Homeless Kids' May Boost Sexual Ri...
Elderly Drivers Drive Slowly to Compensate for Limited Fiel... >>