Happiness of Lisa on Birth of Her Baby Was Short Lived 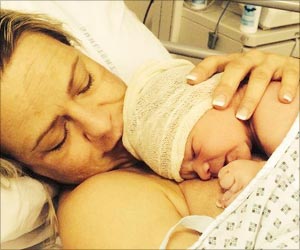 Lisa Parkisson, age 36, was at the helm of happiness when she delivered baby Zac at 2:30 a.m. on Saturday.

But her happiness was short lived since she died suddenly in the postnatal unit where she took rest after her cesarean section at the Royal Oldham Hospital on Monday.

Lisa's father, Robert Parkisson, was informed of the sudden death of her daughter by the hospital staff.

Had she been alive, she would have celebrated her 36th birthday today.
Advertisement
Dance teacher Ally said, "When we got there we expected to be told she'd had to go into surgery but she was already dead. She was in bed, there was blood everywhere, it was so terrible. They said a midwife had gone into check at 8.30am and noticed something wasn't right and they tried to resuscitate her but couldn't."

Lisa's family demands answers over the death of the new mom of little Zac.

Hospital spokeswoman said the cause of death is unknown and that an investigation has been ordered into the mysterious death of Lisa.  The coroner had also been informed, she added.

The new mom is no more but baby Zac still remains in the hospital.

Now, Lisa's family is making plans for the future of the baby that Lisa loved so much.

Preparing for Childbirth is a Beautiful Experience
Pregnancy is the period between conception and childbirth and it can be a testing time for ......

Cesarean Section - Surgical Procedure
Cesarean section is a method of delivering the baby from the mother by means of an operation. The .....