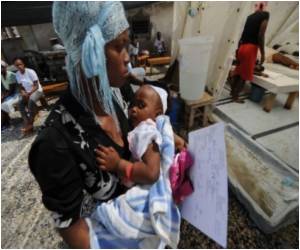 The Haiti cholera outbreak that has claimed the lives of more than 4,850 people bears similarity to a South Asian strain of the disease, says US panel.

A panel of international health experts on Wednesday said the source of epidemic was "debatable" but that the United Nations "worldwide" must change the way it handles peacekeepers' health.

The experts said the evidence "overwhelmingly supports" the conclusion that the Haiti epidemic was due to the contamination of a river near the Nepalese camp "with a pathogenic strain of current South Asian type" of cholera.


Water, sanitation and health system "deficiencies" led to the epidemic spreading further across Haiti, which is already recovering from an earthquake that killed about 220,000 people and political strife.

Cameroon in West Africa is seeing an outbreak of cholera that has infected 3,000 people and has claimed 150 casualties already.
Advertisement
The experts said peacekeepers should be treated and and there had to be better training of staff and improved treatment of waste.

The cholera epidemic erupted in October and authorities have since reported more than 4,850 deaths. The disease had not previously been known in Haiti for a century.

The cholera epidemic which claimed the lives of thousands of people in Haiti has resurfaced in the rural areas of the country.
Advertisement
<< Malaria Costs Rise
Bipolar Drug Lacks Evidence >>

Find a Hospital Color Blindness Calculator Sinopril (2mg) (Lacidipine) Find a Doctor Loram (2 mg) (Lorazepam) Drug Side Effects Calculator Pregnancy Confirmation Calculator Calculate Ideal Weight for Infants Diaphragmatic Hernia Nutam (400mg) (Piracetam)
This site uses cookies to deliver our services. By using our site, you acknowledge that you have read and understand our Cookie Policy, Privacy Policy, and our Terms of Use