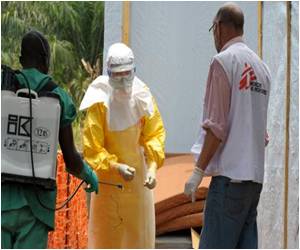 Guinea's Foreign Minister Francois Fall said that after more than 100 people have died, the west African country has brought the spread of the deadly haemorrhagic Ebola virus under control.

"We are pleased to say we have controlled the spread of the epidemic," Fall told reporters after a meeting his South African counterpart Maite Nkoana-Mashabane in Pretoria.
Advertisement

"We have even managed to cure some of those infected."


The outbreak is one of the most deadly, with 157 people infected and 101 deaths in Guinea alone.

"We benefitted from help from the international community to stop the spread of the epidemic," he said.
Advertisement
International aid organisations last week launched a series of emergency measures in Guinea and across west Africa in a bid to contain one of the worst ever outbreaks of the deadly Ebola virus.

The outbreak began in the impoverished country's southern forests, but has spread to Conakry, a sprawling port city on the Atlantic coast and home to two million people.

The World Health Organisation (WHO) has described west Africa's first outbreak among humans as one of the most challenging since the virus emerged in 1976 in what is now the Democratic Republic of Congo.

"It is the first time we have faced this epidemic," said Fall adding that despite acting "very quickly" to stem the tide of the epidemic, "sadly there were a hundred people dead."

Fall said strict measures are being taken to prevent it spreading. Everyone entering or leaving Guinea is checked for Ebola.

In neighbouring Liberia, there have been 21 cases, including 10 deaths.

The virus known as Zaire Ebola, has had a fatality rate of up to 90 percent in past outbreaks, and there is no vaccine, cure or even specific treatment.

Senegal Plans to Stop Ebola With a 'Well-Oiled System'
As the suspected death toll of Ebola cases in Guinea and Liberia rises to 111, Senegal vowed on ......

WHO Says West Africa Ebola Outbreak Among 'Most Chilling' Ever
West Africa's Ebola outbreak, suspected to have killed 111 as of now, is among the "most chilling" ....

Ebola Death Toll in Guinea Rises to 95
The number of deaths caused by the deadly outbreak of Ebola virus has risen to 95 in Guinea ......