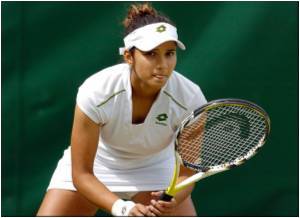 A researcher at University of Hawaii at Manoa has said that frequent grunting during a game of tennis can slow down responses and cause players to make more mistakes while taking decisions.

Scott Sinnett, assistant psychology professor at the University of Hawaii at Manoa, found the potential detrimental effect that noise has on shot perception during a tennis match.

Thirty-three undergraduate students from the University of British Columbia viewed videos of a tennis player hitting a ball to either side of a tennis court; the shot either did or did not contain a brief sound that occurred at the same time as contact.

In some welcome news, tennis champ Martina Navratilova has revealed that she's cancer free.
Advertisement
"This is the first study to look at the issue of grunting in tennis. Our current work is also looking at how advanced and professional tennis players perform, to determine if they have developed any strategies to limit the negative effects of a grunting opponent," said Sinnett.

Sinnett and Kingstone noted that these consequences on faster tennis surfaces, such as the grass courts of Wimbledon or hard courts of the Australian and U.S. Open, are likely to be profound.

Botulinum toxin, which irons out facial wrinkles through injections of the drug Botox, can provide relief for tennis elbow , claims a new study.
Advertisement
Advertisement
This site uses cookies to deliver our services.By using our site, you acknowledge that you have read and understand our Cookie Policy, Privacy Policy, and our Terms of Use  Ok, Got it. Close
×