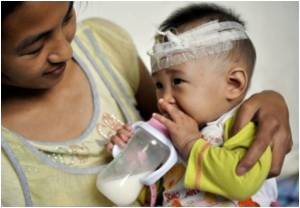 Researchers at the Massachusetts General Hospital have identifies the molecular pathway essential for the growth and spread of medulloblastoma. In their report in the Feb. 28 issue of Cell, they show that blocking this pathway - which involves interactions between tumor cells and the surrounding tissues - leads to regression of all four molecular subtypes of medulloblastoma in several mouse models.

"Our finding that a pathway carrying signals from host cells to tumor cells via placental growth factor and its receptor neuropilin 1 is critical to the growth of medulloblastoma, regardless of molecular subtype, strongly supports evaluating antibodies against these proteins as a novel therapeutic approach to this pediatric cancer," says Rakesh K. Jain, PhD, director of the Steele Laboratory for Tumor Biology at MGH and corresponding author of the study.

A highly malignant tumor that originates in the cerebellum, medulloblastoma accounts for about 20 percent of all pediatric brain tumors and is ten times more common in children than in adults. While aggressive treatment with surgery, chemotherapy and radiation significantly improves patient survival, those treatments can have long-term developmental, behavioral, and neurological side effects, particularly in the youngest patients, making the need for less damaging therapies essential.


Impetus for the current investigation began with studies by Peter Carmeliet, MD, PhD, of the Vesalius Research Center in Belgium, a co-author of the current study. Carmeliet found that an antibody against placental growth factor (PlGF) could block angiogenesis in a number of adult tumors. Since PlGF, unlike other angiogenic proteins, is not required for normal postnatal development, Jain and his Steele Lab colleague Lei Xu, MD, PhD, proposed targeting PlGF as anti-angiogenic treatment for pediatric tumors. Matija Snuderl, MD, of the Steele Lab, a co-lead author of the current study, then found that PlGF was highly expressed in all types of medulloblastoma. Other members of Jain's team found that high expression of the P1GF receptor neuropilin 1 (Nrp1) was associated with poor survival in medulloblastoma patients.
Advertisement
To investigate mechanisms behind the potential role of PlGF in medulloblastoma, the MGH investigators collaborated with colleagues in the U.S., Belgium, Canada and Germany. They first confirmed that PlGF is expressed in patient samples of all subtypes of medulloblastoma and that expression of Nrp1 was more significant than that of PlGF's more common receptor, VEGFR1. Experiments in several mouse models revealed that the presence of PlGF is essential for the progression of medulloblastoma and that treatment with several antibodies against the growth factor reduced tumor growth and spread, increasing animal survival even without substantially inhibiting angiogenesis

The researchers were surprised to find that most PlGF was produced by surrounding supportive tissue called stroma and not by the tumor cells. Further investigation revealed that release of the developmental protein Shh (sonic hedgehog) by tumor cells induces expression in nearby stromal cells of PlGF, which then binds to the Nrp1 receptor on tumor cells, leading to further tumor growth. The authors note that therapies that block the interaction between PlGF and Nrp1 are less likely to lead to treatment resistance than are therapies directly targeting mutations that drive tumor growth.

"The importance of tumor-stromal interactions has been recognized for decades, especially the formation of new blood vessels to supply tumors," says Jain, the Cook Professor of Radiation Oncology (Tumor Biology) at Harvard Medical School. "Our discovery of an entirely different way that tumor-stromal interactions drive cancer progression supports the exciting possibility that targeting that pathway in medulloblastoma could be more broadly effective with fewer side effects for patients. Antibodies against both PlGF and Nrp1 have been developed and tested in adult patients. There is hope that they could be safe in pediatric patients, but that needs to be established in clinical trials."
Source: Eurekalert
Advertisement
<< Gender Gap Causes Women to Work for an Extra 59 Days Withou...
New Nanogel may Help Treat Lupus >>

Parental Preferences Differ From That of Doctors Regarding Pediatric Cancer and Palliative Care
Parents of children in the palliative stage of cancer favour aggressive chemotherapy over ......

Parents Feel Dissatisfied With Consent Process In Pediatric Cancer Trials
Compared with adult cancer patients, parents of children with cancer were more likely to be ......