Grown-Up Londoners and Their Teenage Angst: Britain Catches Onto the 'Cringe Night' Fever 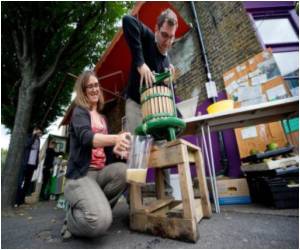 Welcome to the latest social craze to hit London -- "cringe nights", where participants read out their excruciating teenage diaries to a crowd assembled for laughs and mutual embarrassment.

Cathryn Skerry stands on a brightly lit stage holding a little purple book in her trembling hands. She turns to a passage she wrote at age 11: "April 1999: I am ashamed. I am such a bad kisser."

Smack in the midst of London's urban jungle, an apple tree heavy with fruit hangs over the road from a private garden, unnoticed by passers-by
Advertisement

"May 1999: Phil asked me to go out with him. I said no because I thought that if I had said yes, he would have thought that I fancied him," continued Skerry, 28, giggling as she addressed the packed pub.


Although the concept may seem to many shy teenagers like their worst nightmare, organiser Ana McLaughlin described the appeal.

"When you are a teenager, you are the centre of the universe and what is happening to you is probably the worst thing that's ever happened to anyone and that kind of level of drama really is just hilarious," she said.

So-called plus-size models are a growing presence on magazine covers, television and lingerie catalogues -- but at the Fashion Weeks of New York and London they are still the exception.
Advertisement
Because the diaries are normally secret, "you are completely honest", McLaughlin adds -- unlike modern methods of social sharing such as Facebook updates or a blog which are designed to be read by other people.

Better than therapy and far more fun, the key to the amusement is the time lapse. For most of those taking part in cringe nights, at least a decade has passed since they wrote the diaries.

"Enough time has passed to find it funny and ridiculous rather than upsetting," said Skerry, a therapist.

"I really want a boyfriend. I want someone to think I am sexy and funny and talented," wrote Emily Lawler when she was 15 in 1999. "I hate my family. I want curly hair and to be happy. Suicide is the only way."

Some of those performing get into their former angst-ridden roles with gusto, such as Claire Rose, an exuberant redhead with great comic timing.

"Tuesday 24th March 1998: I am really looking forward to the Spice Girls concert. It's only 25 days until the concert," she read from the diary written by her 10-year-old, pop-obsessed self.

"Monday 6th April: The Spice Girl concert is really close and I still don't have half the clothes I need to wear.

"Thursday 9 April: Nine days to go. This is more exciting than Christmas. I think I am going to ask mum for a bra.

"If anyone is reading this then GET LOST YOU SAD LOSER."

Despite her apparent confidence, the young writer admitted she needed a few beers before she got up on stage.

"It's quite an unnerving experience," Rose said, but added: "I see why people come back and do it again, you get quite an adrenalin rush. It's a supportive crowd, everybody laughs."

Cringe nights began in the United States in 2005, and made their way over the Atlantic to Britain in 2007, although it was not until recently that regular nights were held.

Most of those taking to the stage in London last week were women in their twenties or thirties.

"Girls seem to be bigger diary keepers than boys," said McLaughlin, adding that their recollections were also far more revealing.

They could spend five pages detailing a single look from a boy and describing what he was wearing, whereas "the boy's diaries say: went to town, saw Sarah, she looked fit," she said.

Among the few men who braved the bright lights was Matt Rose, who read out his diary entry from a school trip to Greece when he was 15-years-old.

"I tried to buy cigars for Ollie at the airport and when they asked me for my passport, I said I'd go and get it and ran away," he read.

"On Sunday, I puked in the main hall of the national museum of Greece" after a night of underage drinking -- a recollection that left Rose laughing loudly.

Bike-friendly Bars Popping Up in London

London has gone cycle crazy this summer--it might be the inspiration of the Tour de France, the traffic or the unexpectedly hot weather, and biking cafes are now the coolest spots in town.
Advertisement
Advertisement

Q Fever takes its origin from word query and is caused by bacteria Coxiella burnetii that infects some ...
This site uses cookies to deliver our services.By using our site, you acknowledge that you have read and understand our Cookie Policy, Privacy Policy, and our Terms of Use  Ok, Got it. Close
×