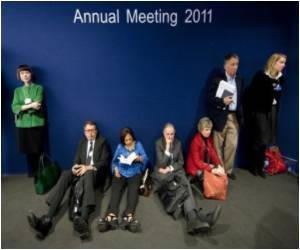 Global delegates at the World Economic Forum got exhausted after a rough four days of world leaders' speeches and wild parties were warned of the growing stress-related illness and burnout.

Economic turmoil, round-the-clock communication and constant social pressure to succeed have led to a costly increase in stress-related illness and burnout, a panel of experts told a packed session in the Swiss ski resort of Davos.

"In the future, the greatest challenge to the global health system will be stress-related diseases," said Heinz Schuepbach, director of the school of applied psychology at the University of Northwestern Switzerland.


The phenomenon is rapidly growing more prevalent, he added. According to a study this week by one of Germany's top health insurance companies, one in five workers in Europe's top economy has fallen ill from stress at work.

Today most of us are under stressful situations which is hard to avoid.Explore our simple and inexpensive stress relief tips.
Advertisement
In the last four years, sales of anti-depression drugs have risen by more than 40 percent in Germany, the study showed.

As burnout is not an "official" disease, concrete statistics on its spread are hard to come by, said Toni Bruehlamm, chief doctor at the Hohenegg clinic in Switzerland and an expert on the subject.

"But it is definitely becoming more and more frequent. I see this from the number of people I see in my clinic and from what my colleagues tell me," he told AFP.

The financial crisis, still a major topic at this year's gathering, has contributed to global stress levels, with employees unwilling to take time off work even when they are ill for fear of being laid off.

"There's a new phenomenon. We've moved from absenteeism to presenteeism. People go to work even though they should stay at home because they are sick," said Schuepbach.

"We are never satisfied with what we're doing. We have to do things faster, better," he added.

"The economy is influencing society too much. Performance, money, all these factors have taken on too much importance. There's simply too much emphasis on profits and money and it's simply not healthy," said Bruehlamm.

As several audience members tapped emails on their smart phones and others snoozed, Schuepbach blamed modern communications and a 24-hour-a-day working culture for the phenomenon.

"Deadlines have to be met and it doesn't even matter where you do your work any more. I used to go home at 5pm and if my job wasn't done, then that was fine. Now you can work around the clock," he said.

With concerns about rising food prices, persistent fears over the environment and lingering worries about the debt crisis casting a pall over the annual pow-wow, organiser Klaus Schwab warned of a "global burnout syndrome."

And the syndrome hits executives where it counts: in the pocket. According to the World Health Organisation, the average burnout victim takes 30.4 days off work, costing billions to the economy.

"It's my first Davos and it's actually pretty exhausting," she said.

"You start working at 7am and you're not done until at least 2am by the time you've finished with the various receptions and parties.

"How the world leaders cope with the stress is beyond me," she said.

The global financial crisis is affecting people's lives at a big scale in Australia, with the national divorce rate spiking 5 percent during the crash.
Advertisement
<< An Environmentally-Friendly Diet
Less Time With Fathers Lead Children to Bullying >>